From 1935: Middletown Bridge Topic At Meeting 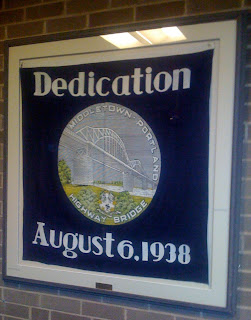 This article is from exactly 75 years ago today, published in The Hartford Courant on September 12, 1935.
The Public Works Administration (PWA) was created by the National Industrial Recovery Act, as part of President Roosevelt's New Deal, during the Great Depression. The stated goal of the PWA was to revive American Industry, in contrast to the goal of the Works Progress Administration (WPA) which was to provide work for the unemployed. The PWA spent over $6 billion.
------------
Congressman Citron and Senator Thompson Discuss Ways to Make Project Acceptable
Seeking to make the $4,000,000 Middletown-Portland bridge project acceptable to Federal PWA authorities, Congressman William T. Citron and State Senator Harvey L. Thompson of Midddletown, and Leslie A. Hoffman, acting state PWA director, met in the local PWA offices Wednesday.
Advised of reports from Washington stating the bridge project had been turned down by Harry L. Hopkins, Federal relief administrator, Mr. Hoffman said:

I have had no official word from Washington as to approval or rejection of the project. We are meeting here with a view to reconsider the project if it is unfavorably looked upon in Washington.

Washington reports indicated that Administrator Hopkins turned down the bridge project, along with about a score of other Connecticut projects, because the man-year costs are too high, thereby not employing enough men and extending the building of the project over a longer period of time.
Project Called Desirable.
The conference at the State Capitol was called, it was said, to reconsider and reanalyze the bridge project with a view to bringing it in line with Administrator Hopkins's ideas.
Senator Thompson said:

The Middletown -Portland bridge project is very desirable. A grant by the government of $1,800,000, or 45 per cent of the estimated cost of the bridge will not only bring employment to the men actually employed on the building of the span, but to those in the cement and metal plants supplying materials.

Middlesex County wants this bridge very much. If the Federal Government comes in and assists in the building, it will not only help the county; it will help the state and the country as a whole. The bridge is on one main New York-Boston highway, and other through routes, and the benefits will be widely distributed.

No action will be taken by the conferees, it was stated, until official word is received from Washington as to the definite disapproval or approval of the bridge project.
Posted by Stephen H. Devoto at 5:00 AM

Email ThisBlogThis!Share to TwitterShare to FacebookShare to Pinterest
Labels: arrigoni bridge, this date in history

ok so now when are we going to light the arches of the most significant bridge in CT, that would be huge for Middletown !!!

Hopefully someone's memory is better than mine. I seem to remember a number of years ago CLandP had a proposal to do just that. I remember watching a meeting on TV when a company representative advocating for something they wanted from the city reminded the council or commission of the generous plan to light the bridge. Their request was denied. We have no lights. Anyone remember?

I don't remember the details either, but I think one of the reasons lighting was never implemented was that they would have just contributed to urban light pollution -- the trend these days being to allow people to occasionally see a few stars in the firmament. But perhaps there was a financial reason as well...

There is a large and splendid painting of the Arrigoni Bridge at the New Britain Museum of American Art. Alas, NBMAA spells the name of the bridge incorrectly on the descriptive plaque next to the painting. We were surprised to discover recently that you can see the bridge from the rear patio of Mezzo Grille on Court Street.