On the gymnasium risers at Macdonough Elementary School stood the future governor of Connecticut, but there was not a Board of Education member, or a member of the school board administrative staff in sight.

On this night when the three candidates for governor came to debate, sponsored by ConnCan, at a school which represents achievement despite odds, the Board of Education decided against postponing a scheduled workshop called "The Board: All About Us" (no lie) and so failed to attend. 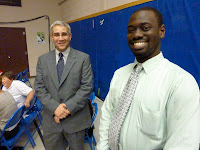 ConnCan also failed to invite, or introduce Mayor Sebastian Giuliano, who attended anyway, and made sure that organizers understood his feelings about being left off the guest list.  On the list were many state-level Democratic politicians (Tom Gaffey, Joe Serra, Jim O'Rourke, Matt Lesser and Paul Doyle) and Meriden Mayor Michael Rohde.  Chairman of the Planning and Zoning Commission Quentin Phipps and member Richard Pelletier along with alternate board member Michael Johnson attended along with numerous teachers, union representatives, parents and other interested parties.  Members of the Common Council were also absent due to a workshop on parking held at city hall. 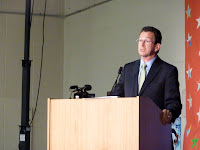 The substance of debate revolved around the need for change, and each candidate, Democrat Daniel Malloy, Republican Tom Foley and independent Tom Marsh all took slightly different approaches to what each described as a seriously-flawed system.

Malloy repeated referred to his "seventeen page plan" for education in the state from pre-K to higher ed as "the only plan" on paper issued by any candidate.  He championed recently-legislated parent governance council which allow parents at failing schools to reconstitute education there.  He also demanded that more money be put into classrooms than into administration. 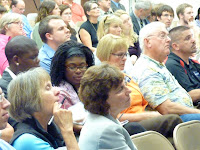 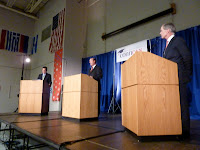 Malloy, like his counterparts, extolled the virtues of charter and magnet schools, noting that he was the only one on the dais to have approved the creation of a charter school when he was mayor of Stamford.  He emphasized the importance of student performance but called for strengthening of school management teams, mentoring, intervention and supervision.  To solve the achievement gap, Malloy felt that his call for a universal pre-k program would go a long way to giving all students the preparatio they need for a solid education. 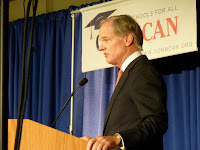 Foley took a more revolutionary approach to change, indicating, for example, that "tenure is a corrosive system for education," and stating that when he becomes governor, "kids will come first."

"I think people who are against teacher performance evaluations are against progress," Foley said.

Foley champions what he calls the "market forces" of choice including the support and creation of magent and charter schools, the identification and promotion of excellent teachers, the need for money to "follow the student" and not lag behind with test results, strict teacher evaluation and reform-minded people on the state Board of Education.  Foley also called for a universal high school graduation test.

"This is a war, and we can't afford to lose it," Foley said. 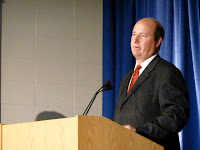 Marsh emphasized that the responsibility for students lies with parents, primarily, and not with schools, and that schools should not "become the dumping ground for society's social programs."   He also assailed a system in which teachers are rewarded for length-of-service and not performance. 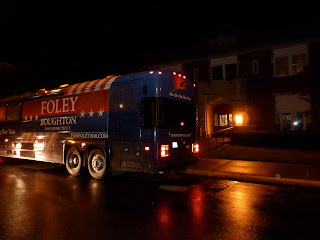 The debate was not without its sniping.  Foley called Malloy a "career politician" and indicated that Stamford had the highest achievement gap of any city in Connecticut.  Marsh noted that Malloy found support from teachers and their unions "the people who brought the education system to where it is."  Malloy said that neither Foley nor Marsh had the experience or the plans to make any significant changes.

Surprisingly, no candidate talked about the inequities of municipal property taxes as a method for funding schools across the state, or how that impacts the achievement gap between wealthy suburban districts and strapped city schools.  Nor did candidates acknowledge that the success of many schools of choice (magnet and charter schools), is determined by their ability to be selective about students admitted, to reject and eject students who are problems, to ignore standardized testing and to work outside of negotiated contracts with teachers.  Though each candidate did concur that not enough magnet or charter schools could be created in the state, early enough, to solve the crisis they observed in education.
Posted by Middletown Eye (Ed McKeon) at 9:54 PM