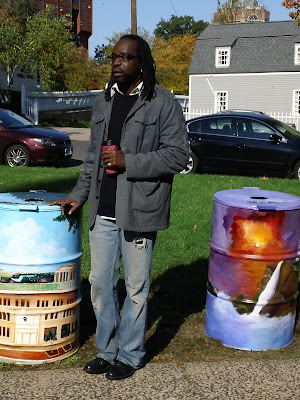 A ceremony marking the installation of brightly painted recycling barrels on Main Street was held this morning on the South Green. Middletown resident and artist Pierre Sylvain designed and crafted the barrels, which will help the city decrease the amount of recyclables that get thrown in the trash. The project was Sylvain's idea and was a collaborative effort between Public Works, the Commission on the Arts, and the Recycling Commission.

In talking to Pierre, it is very clear that he is not accustomed to being in the spotlight. He modestly expressed that he is very happy to be a part of this project and that he thinks it brings an exciting and useful element to Main Street. The ceremony was well attended by many members of the Common Council, the Commission on the Arts and various other city departments. Spotted in the crowd were Kim O'Rourke the City's Recycling Coordinator, and John Hall and Susan Hall of the Jonah Center for Earth and Art.

During the ceremony, Joyce Kirkpatrick, former Arts Commissioner, called Pierre Sylvain the "Steve Jobs of Middletown" for his success in combining vibrancy and design with function. She thanked him for the "love, energy, and talent" that he put into the project. Director of Public Works Billy Russo said that it's important that we start recycling downtown, and that the barrels are already getting attention and comments about how they liven the area. Common Council member Ron Klattenberg compared the recycle barrels to the sculptures that once adorned Main Street, saying that they bring back some uniqueness to Main Street that he feels was lost when the sculptures were removed.

Mayor Giuliano, who is always so strongly supportive of the arts in his words and actions, had this to say:

“As far as I'm concerned, you can turn everything into a work of art... There was a time in the world where that was the culture. No matter what it was, it had to be a work of art... Even the public works projects of the last century, they had to be more than utilitarian, they had to provide an aesthetic benefit to everybody. I don't know if we ever lost that in Middletown. I think it's something we want to continue to encourage. When we have citizens that are willing to step forward and do that they really are owed a debt of gratitude by the community.”

The entire ceremony is available to watch online, in two parts, at the following links:

Click here to see Part 1, featuring remarks by Joyce Kirkpatrick, former Chair of the Middletown Commission on the Arts, Billy Russo, Director of Public Works, and Ron Klattenberg of the Common Council.

Click here to see Part 2, featuring remarks by Mayor Sebastian Giuliano, who makes some beautiful comments about the importance of art and how art keeps Middletown great.
Posted by Karen Swartz at 2:19 PM

Email ThisBlogThis!Share to TwitterShare to FacebookShare to Pinterest
Labels: art, City of Middletown Commission on the Arts, Pierre Sylvain, recycling

Karen - A fine representation of the event. One correction - Joyce Kirkpatrick continues as a Commissioner on the MCA. She is no longer the chair as you rightly mentioned, but was so when Pierre came to the MCA for funding to assist in his project. Thanks for reporting on this positive news for our City. Now, it's up to all of us to carry on with the spirit of Pierre's work.