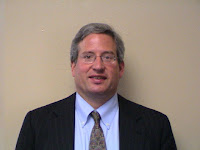 All Middletown municipal government candidates have been invited to complete a questionnaire about their candidacy. This is one in a series of profiles based on submitted questionnaires. Profiles will be published in the order they are received from candidates.

I didn’t grow up in town, as so many of my colleagues did. I chose Middletown over every other community in Connecticut. I married Maria about 4 years ago, and we bought a house in Westfield, where we live with a very small dog who thinks he’s the Fenris wolf.

I attended Trinity College and the University of Connecticut School of Law. I am an assistant public defender with the State of Connecticut.

If re-elected, this will be my sixth term. For the last 5, I have served on several different commissions, including Public Works, the WPCA, the Board of Health, and Ordinance Study.

I note that I am the only member of the council from either party who is a practicing attorney; and I believe I am the only attorney running for council this year. As such, extensive legal training and experience has given me invaluable insights into the legal problems which the council encounters on a day to day basis.

I’ve already discussed my status as an attorney. In my day job, I’ve dealt with murderers, serial killers, drug dealers, and other, extraordinarily anti-social people. This has given me a unique ability to have patience and understanding in dealing with politicians.

Frankly, I think a thick skin and a good sense of humor are the only indispensible attributes to a councilperson. Each of us brings different skills to our positions; we are as strong as the skill sets we have collectively. But the ones without those two attributes don’t last very long.

This is hard to answer: “I’d like to serve my community” is true but sounds so trite and cornball. I guess the answer would have to be that although everything I’ve ever encountered as a councilman takes longer to do and is harder to accomplish than it should be, that over the last ten years I have still accomplished some things which were worthwhile and which I’m proud of, and I believe there are more positive things I can do for Middletown.

Hold the line on taxes; but we all want to do that, no?

I’d like to see better communication and coordination between the council, the mayor’s office, the Board of Education, the WPCA, the city unions, and the plethora of other civic entities through which Middletown enacts its daily business. In a nutshell, I don’t think we work as well together as we could or should.