After hearing from the Police Chief and Fire Marshall, the Planning and Zoning Commission unanimously approved a special exception for an expansion and modification of The Public nightclub. The Commission also gave a highly negative recommendation of proposed Ordinance changes regarding farm animals, following the testimony of several members of the Farm Bureau.

Public Bar
Tyler DeVecchis, owner of The Public, needed retroactive P&Z approval for an expansion which he did last year. Additionally, concerns about public safety were raised by a disturbance at The Public which led to a large police response on December 27th. As a result of this incident, The Public is now required to hire two off-duty police officers on Friday and Saturday nights. The commissioners had delayed a decision on the expansion at their last meeting, so they could hear from the Police and the Fire Department whether The Public nightclub was safe for downtown Middletown. 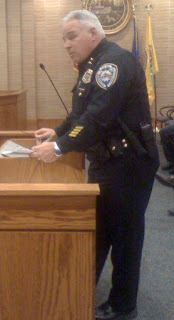 Chief McMahon told the commissioners that The Public generates on average about twice the number of police service calls as another popular bar on Main Street, Nikita's. He acknowledged that these service calls cannot be used to evaluate the relative safety of each drinking establishment, because some bars will call the police proactively, to prevent any trouble. McMahon was reluctant to make an evaluation of the effects of The Public on Main Street
safety for the commissioners.
Commissioner Nick Fazzino pressed him, "Shed some light for me on how it's affecting downtown." Chief McMahon responded with a rhetorical question which he then answered, "Does this type of establishment tax our services? Yes, it does." But he went on to say that his department would always take a proactive view towards preventing any problems from occurring.

The Fire Chief and Fire Marshall both testified that the expanded facility met all fire and safety codes.

The Commissioners unanimously approved the DeVecchis application, but not before Chairman Quentin Phipps admonished DeVecchis that he needed to work hard to rebuild the trust of the community as well as his neighbors in the Downtown Business District.
Animal Ordinance
Several members of the public rose to criticize a proposed ordinance change regarding the keeping of farm animals in Middletown. Joan Nichols introduced herself as a Government Relations Specialist with the Connecticut Farm Bureau. She protested the requirement that animals be 25 feet from the property line, calling this setback a government taking of an enormous amount of usable pasture land from farmers, leaving the farmer with an unmanageable strip of land which would be grown over with vines and saplings. She suggested instead that the regulation require fencing sufficient to stop animals from reaching neighboring property. 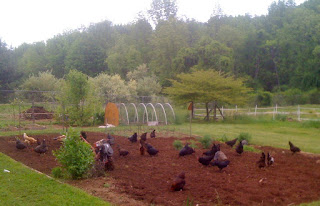 Nichols also objected to the restriction that animals be kept 75 feet from any body of water. She said that state statutes explicitly permit the grazing of cattle in wetlands, and that many farmers have ponds which they use to water their animals. She likened the 75 feet rule also to a taking of a farmer's land. Two farmers, active in the Middlesex County Farm Bureau, John Paul and Barbara Schukoske, echoed Nichols' concerns. I also spoke, as someone with a few farm animals on about 5 acres, agreeing that a 25 feet set back from the property line would cause enormous practical difficulties for farmers.

The Planning and Zoning commissioners agreed with the farmers' concerns, and voted unanimously to give the proposed ordinance a negative recommendation. In addition, they recommended specific changes in the ordinance, in particular to fix the set-back and wetlands provisions.

Other business.
The Commission approved a Site Plan for a 12,000 square foot commercial office building on Middle Street, near the intersection with Timber Ridge. They approved a lease of a 2400 square foot space in the Remington Rand building to Joseph Labella as warehouse space for his painting business. The rent will be $800 per month ($4 per square foot per year). The Commission approved an application by John Moore for his business, Fat City Customs, to obtain a new car dealership permit from the state. Moore said he needed this to sell his custom built motorcycles.
Posted by Stephen H. Devoto at 5:00 AM

Email ThisBlogThis!Share to TwitterShare to FacebookShare to Pinterest
Labels: farm, planning and zoning commission, The Public