Arline Rich died on July 20th, after a two month illness. With her passing, the city has lost one of its most dedicated participants in civic governance; Rich was a decades long observer of municipal boards and commissions, and unafraid to do what she could to influence their deliberations. Her dedication, knowledge, and participation impacted land use decisions throughout our city. 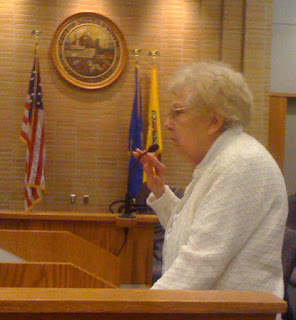 Rational and Reasonable
Rich's mode of participation was thoroughly non-partisan, in countless discussions of city projects with her over the course of nearly 15 years, I never learned which candidates she favored at either the local or the national level. If she had an agenda in her opposition or support of any proposed land use, it was never pro- or anti-development, she simply wanted all development in Middletown to be rational and reasonable. For her this meant that every developer should adhere to regulations which are themselves rational and reasonable.

Rich paid more attention to more developments than anybody outside of the City Planner's office. She closely studied all proposals in Westfield, and many in other parts of the city. For nearly 20 years, she clipped the agendas of city meetings out of the newspaper, and if there was a subdivision on it, the Planner's office would know to expect her in the office. She would pore over the developer's plans with a ruler in one hand, and the zoning regulations in the other. No discrepancy would get by her, she paid attention to set-backs, to lot frontages, to the City's Plan of Development, to anything that impacted the city's wetlands, public safety, traffic, or tax base. She would carefully document any discrepancies with Planning and Zoning, and request that each one be addressed before approval was granted.

Recognizing the importance of the zoning regulations and the Plan of Development, Rich spent many hours reviewing any proposed changes to them. Bill Warner, head of the Planning Office, could count on her to point out not only the typos and misspellings, but also the gaps and inconsistencies in the regulations. Our city's current regulations on land use are better for all the work she did on them.

No NIMBY
Her persistent attention to the technical details was one of Rich's greatest strengths, and earned her respect from developers and planners alike. She was no "Not in my backyard!" activist, concerned only about one particular subdivision which might ruin her view. She consistently applied the principles of reasonable and rational to every proposal, whether it was in her neighborhood or not. Developers would often present their plans to her at Westfield Residents Association meetings, knowing that their chances of approval were immeasurably better if they got the Rich imprimatur.

One developer angrily and bitterly fought Rich's ultimately successful efforts to reign in his trash dump, which had been cited for violations by the state. Ten years later, when he had a separate development under consideration, he tried to woo Rich with cannoli while showing off his new plans. She enjoyed the cannoli, but they had no effect on those eagle eyes, which were not going to overlook any details in the plans.

Official Honors
Rich served in an official capacity with the city on two occasions. In the early 1990s, after the Kennedy family donated the land on Country Club Road to the city, Rich served on the building committee for what would become Smith Park. As usual, she paid attention to details. In an era before widespread cell phones, she insisted that there be a telephone in the park, and after the park was finished she regularly checked to make sure the phone was working.

In 2008, the mayor appointed her to a committee of residents tasked with finding an alternative site for the Army's training center. She brought to the committee her immense experience with land use, her fairness, and the respect she had earned in the city; she played a critical role in the ultimately successful resolution of the conflict between the Army Corps of Engineers and the City.

In 2006, Rich was given one of the city's highest honors, the Mayor proclaimed an "Arline Rich Day", and she was given the Keys To The City, in recognition of all she had done for Middletown.

A Lesson And A Legacy
In my opinion, there are several reasons for the outsized influence that Arline Rich had in our city.

She was completely focused on the practical. She paid attention to the regulations and the process by which developments are evaluated, and applied them to every proposal. She achieved universal respect with informed discussion of setbacks and lot sizes, something that would have been considerably more difficult to generate if her focus had been on more abstract, quality of life issues.

She was utterly unafraid to speak her mind, and unafraid to change it. After having studied an issue, she would come to a conclusion and let all of those in charge of making the decision know what she thought. But though she was determined, she was never stubborn to the point of closing her mind. She listened carefully to alternative opinions, and if persuaded was willing to modify her position.

Finally, she was indefatigable. For years, she would prepare for, and attend, two meetings every month of the Planning and Zoning Commission. This diligence and consistency, listening to every discussion on every little Planning and Zoning issue, gave her experience she could draw upon when there was a bigger issue, and it won her the respect of everybody involved.

There are two ways that her diligence and persistence improved developments. First, she found violations on developer's plans, and ensured that they were corrected before approval. Second, everybody involved in a development was more careful, knowing that Arline Rich was going to look at their work. The developer was less likely to cheat, the planning office was less likely to be careless, and the Planning and Zoning Commission was more likely to exercise diligence.

Arline Rich does not leave behind the kind of legacy left by others who have given to our city. There is no cul-de-sac in a subdivision with her name emblazoned across it, there is no plaque at city hall honoring her service as an elected official.

Rather, her legacy is scattered throughout the city, on the land and in our neighborhoods. If the setbacks and lot lines on the development down the street are correct, if the developer followed through on all of his proposed plan, thank Arline Rich.

"Si monumentum requiris, circumspice." If you seek her monument, look around you.

The Conservation Commission will miss her very much.
Sheila Stoane, Vice Chair

Middletown is a better place because of Arline Rich. She worked tirelessly to improve the developments in Middletown and she was fair and reasonable even in her opposition to a development. She was open minded to consider alternatives and based her positions on fact not feelings. Middletown has lost an unsung hero. Diane McCartin