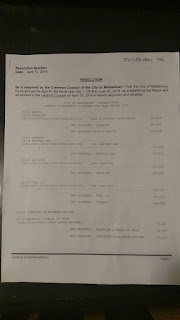 The Common Council passed the city budget for 2018-2019, and in the process eliminated the Arts Coordinator position from the city budget.  Until recently, the position was held by Stephan Allison, who has retired.  The coordinator was in charge of all city arts presentations, including concerts, the celebration surrounding the Independence Day fireworks, and all relationships with the Children's Circus, Oddfellows Playhouse and many of the other arts organizations in the city.

Cutting the coordinator's position saved the city $84,406, though the already-posted position would likely have hired a candidate at a much lower rate.

The budget, developed by the Democratic caucus of the Common Council, was only released an hour before the budget vote on Monday evening.  Republicans on the Council complained that neither they, nor the public, was able to examine the budget before it was presented for the vote on Monday.

In other budget developments, the Police Department was denied the ability to hire three new officers as requested.  The police officers were to serve as SRO officers in city schools.

The Board of Education budget was technically cut by $500,000, but capital expenditures picked up by the city, new Alliance grant dollars from the state and the Council's promise to allow the Board to carry over funds from previous years, means that the Board of Ed, and new superintendent Dr. Michael Conner will be able to pursue plans for major changes in Middletown's schools.

In the final vote on the budget, all but two Republicans, Deb Kleckowski and Linda Salafia, voted to adopt the budget which was cut by $1.2 million from the budget presented by Mayor Dan Drew.

Can you post the other pages in the resolution?

Slowly but surely, the Common Council has eviscerated the Arts Office over the past decade +. That's not to say that Council members do not see the importance of the Arts in the lives of the people. Perhaps, many of them do not see that the acts of creativity, performance, and production are "work", as fundamental to citizens as education or building a bridge or paving the roads.

You've got to be kidding ! The arts just don't cut it … perhaps the most important of a civilized life in this time of turmoil and you say "no" to the arts? Rethink this, folks. This isn't the dark ages.

So two GOP women stand up for not cutting arts and the Democrats do not?

Anon 4:17, actually the Republican Common Council members who voted against, voted against any raise in budget expenditures, however Salafia bemoaned the loss of the SRO officers.

Arts Director should be a part time position or under the duties of Park & Rec perhaps.

Thank you for bringing this to the public’s attention.
The Commission on the Arts (MCA) is now aware of the situation and will be working with the City Council and the Mayor on restoring this essential position.
A big thank you to those whose support has already been shown in the Comments section of the Middletown Eye.

Arts for All - All for the Arts,
Executive Committee
Middletown Commission on the Arts

I'm very disappointed to hear this. The Arts are PROactive for healthy lives and vibrant, attractive cities. The Arts increase the quality of life, unifying communities and result in economic increases! The Arts empower people and keep kids off the streets, they build self-confidence and forward thinking. The Arts are part of what makes Middletown special among neighboring towns and a great place to live! Developing our City's Arts programs and unifying them, building upon them to enrich the lives of people is what we should be doing, in my opinion. Does the Council have any plans to do any of this? "Nice AND Necessary" says the State. What are WE saying?

I spoke with Marc Pettersen recently who I thought would be a great Coordinator. Marc is an artist who lives on Main Street in the Middletown Artists Cooperative. He is very creative and has written many grants to get funding for his own projects. Marc has participated in many art projects around town and volunteers a great deal of time to improving our Main Street. In addition to another job, he is working part time at the East Hartford Library running a program for children, for which he obtained funding. The Cromwell Library wants him to go there also. Someone like this, young, creative, capable of finding funding, who knows many people and organizations in Middletown and who understands technology, would be a boon to our City. Someone like that could benefit Middletown far more than would the saved salary. I hope the Council has a plan for the Arts coordination, and doesn't just brush it under the rug like it doesn't matter or isn't needed, or add it to some other department's long list of responsibilities. I believe we should focus ON the Arts, on growth and moving forward!

To anon 3/16/18 11:47am - you are sadly uninformed on the duties, responsibilities, and demands of the position.