“I want to thank DOT for holding these forums because commuters’ voices need to be heard,” Rep. Lesser said. “I urge you to attend one of these public hearings or submit written testimony.”

A list of the proposed fare increases can be found online at www.ct.gov/dot/farecomments.

The Path To The Ballot, Part III 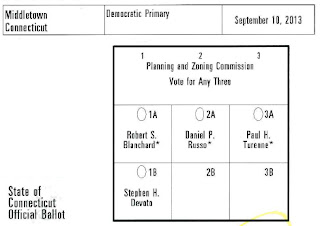 I am a Democratic candidate for Planning and Zoning Commissioner, in the September 10th primary election, because 717 registered Democrats signed a primary petition to put my name on the ballot. During the process of qualifying for the primary, I realized that the issue of how candidates are chosen to be on the ballot is at least as important for a democracy as the voting that later determines who is elected.

This is the final of a 3-part series on access to the ballot in Middletown. Please note that this is not intended to be journalism: I believe everything to be accurate, but I am not a disinterested observer. A mainstream journalistic account can be found in The Middletown Press.
------------------
When I began this series on ballot access, I seriously doubted that I would succeed in getting my name on the ballot for the September 10th Democratic primary. Now that this has happened, I will recap the process, and then offer my perspective on how our political parties decide who gets on the ballot in Middletown.

717 Signatures
I began collecting signatures on July 25th, dubious, daunted, and despairing. Frankly, I did not think there was much hope of getting the necessary 519 officially verified signatures of registered Democrats by August 7th (519 is 5% of the 10,367 registered Dems in our city).

Happily I was wildly wrong.

About a dozen supporters helped me to bring primary petition forms to neighborhoods, storefronts, and public events. Our efforts went so well that we finished on August 3rd.  By the time all the primary petition forms were handed in to the Clerk's office, we had 717 verified Democratic signatures, nearly 40% more than required.

My perspective on the rules for primary petitions has changed since I began collecting signatures. I was initially concerned that the threshold and time table were excessively draconian, giving the Town Committee nearly absolute power--its endorsement was the only realistic way to get on the ballot. Now, after having walked the streets and spoken to several thousand residents to collect signatures, I think the rules are reasonable. A primary election should not be easily triggered, and the rules prevent a flippant primary challenge by someone who does not demonstrate a personal commitment to campaigning, and support from the community.

Conflict of interest: a situation in which a public official's decisions could be influenced by the official's personal interests
At least 5 people expressed an interest in being nominated for Planning and Zoning Commissioner: Paul Turenne, Rob Blanchard, myself, Dan Russo, and someone currently serving on the Design Review and Historic Preservation Board. The nominating sub-committee was charged with interviewing each candidate, deliberating, and then recommending to the Town Committee which 3 of the 5 should be endorsed.

The importance of the nominating sub-committee cannot be over-stated, the Democratic Town Committee does not question its endorsements and typically votes unanimously for its entire recommended slate.

Were City Democrats served by a fair and open process?

Candidates for Governance or for Electioneering?
Political groups such as the Democratic Town Committee want their loyal members elected, this is neither surprising nor controversial. In contrast, City residents, including Democrats, want their elected officials to have the experience and demonstrated commitment to govern effectively. In selecting candidates, the nominating subcommittee has a responsibility to Democrats and to the city to balance these two sometimes opposing interests.

The nominating subcommittee did not live up to this responsibility when it endorsed candidates for Planning and Zoning.  Although every candidate necessarily has a large ego (each says "I know who you should vote for!"), I think it is safe to say that experience and a demonstrated commitment to Planning and Zoning did not play a significant role in choosing 3 nominees from the following 4 candidates.

[Attendance at P&Z meetings is recorded in the minutes.  In my case, attendance is also documented by my public writing for The Middletown Eye community newsblog, I posted at least one article about each of the 50 meetings I attended. Blanchard and Turenne confirmed to me that they have never been to a P&Z meeting.]

Dan Russo, Rich Pelletier, and Dan Pickett decided that I was the worst of the four candidates for Planning and Zoning. Why?

The nominating committee spent most of my interview probing my commitment to electioneering for municipal Democrats, and was clearly dissatisfied with my answers to questions about loyalty to the nominating subcommittee's endorsements. Immediately after the interview Dan Pickett informed me that I had "hit it out of the park with Planning and Zoning," he did not need to say that I was weak in the electioneering and loyalty category.

As the primary election draws closer, the leadership of the Democratic Town Committee has dropped any pretense that the election is about experience and commitment, the tag line for the 3 endorsed candidates is, "REAL DEMOCRATIC VALUES YOU CAN TRUST."

Although I appreciate the need that the Town Committee has for electioneering, if it is to remain credible with Democrats at large, it should also take governance into account when choosing nominees.

Dan Russo asked me during the nominating subcommittee interview whether I would remain loyal to the other candidates if I was nominated, and he referred obliquely to someone with whom I was associated, who Russo felt was disloyal. When I said the name "Ed McKeon", Russo solemnly nodded.

This was not the first or last time that McKeon has been brought up as something that Democrats should avoid.  McKeon was nominated as a Democratic candidate for the Board of Education in 2011. The town committee cut him out of its campaign literature, because it felt McKeon was not loyal to all of the other candidates. Despite that, McKeon won election, garnering more votes than Drew or any other candidate except Gene Nocera.  Since then, he has been used as an example of the kind of person that should not be nominated.  I honestly do not get it. Why would the Democratic Party turn away a successful Democratic elected official? Why not take credit for him?


Mayor Drew highlights as one his biggest accomplishments the ending of lawsuits and the new spirit of cooperation between the city and the Board of Education.  McKeon is the Secretary of the Board, he has played a critical role in this. McKeon ran as a Democrat, won as a Democrat, and has governed with enormous effectiveness as a Democrat. Why would Dan Russo treat McKeon as the bogeyman (he who must not be named), and not as a prime example of his success in recruiting and electing individuals who have competence and commitment for governance? Is loyalty and electioneering the only thing of importance?

Democratic Pride
I am deeply committed to the values of social and economic justice, environmental protection, education, and peace between nations. At the national level, it is obvious that the Democratic Party aligns with my values. I am enormously proud to be a Democrat.

Since I am inextricably rooted in the Democratic party, I do not view the local Democrat Party as an abstract party of others, it is my party. That is no small part of why I chose to challenge the endorsed candidates for the Democratic nomination. I want voters in my party to have an opportunity to evaluate candidates on the basis of experience and commitment; my party's nominees should not be determined by the judgement of the small nominating subcommittee, based solely on loyalty and electioneering.

I want my party, the Democrats, to have a nominating process that is fair and open.

I want my party, the Democrats, to put forth the three most qualified candidates in November.
Posted by Stephen H. Devoto at 8:38 AM No comments:

From the State House Democrats.
----------------
House Speaker Brendan Sharkey (D-Hamden) is pleased to announce that he has appointed House Chair of the Aging Committee Representative Joe Serra (D-Middletown) to Co-Chair the Task Force on Alzheimer’s Disease and Dementia.

"Rep. Serra's experience as Co-chair of the legislature’s Aging Committee as well as his work leading the Aging in Place task force makes Joe the perfect choice for this important new assignment," Speaker Sharkey said. "Joe’s long tenure of working to improve the lives of seniors in Connecticut is well known, and I am confident he will take on this role with that same dedication."

A Rose By Any Other Name