DUE TO THE FORECAST FOR SATURDAY, OUR HIKE IS BEING MOVED TO SUNDAY. REMEMBER TO SET YOUR CLOCKS BACK!

November 4, 2018 at 9:30 a.m. join The Rockfall Foundation for a 2.6 mile hike on the Mattabesett and Reservoir Loop Trails in Middletown, CT. Hike around a beautiful reservoir plus a spur to an overlook and Rock Pile Cave. Moderately difficult terrain at a fast pace, with a few steep open rock faces. Must be comfortable with hand-assisted scrambling. 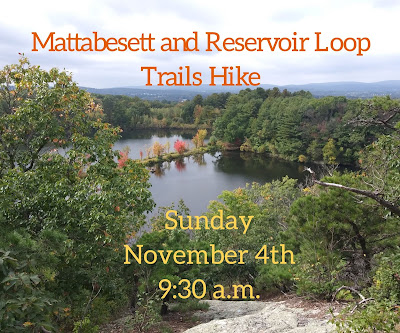 From the North: Take Route 9 South to exit 11. Turn right onto CT-155E/Randolph Rd. The dirt carpool lot is 450 feet on your right.

From the South: Take Route 9 North to exit 11. The dirt carpool lot is immediately on your left at the end of the ramp.

RSVP encouraged, but not required, to hike leader Amanda Kenyon by 11/2: amanda@rockfallfoundation.org


All participants on Rockfall Foundation hike outings are required to sign a standard liability waiver. If you would like to read the Liability Waiver before you choose to participate on an outing, please contact the hike leader.
Posted by Rockfall Foundation at 3:25 PM No comments: 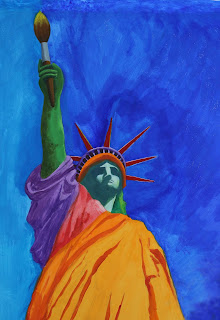 As part of a series of events funded by the Middletown Commission on the Arts, Russell Library will open an exhibit of art works by immigrant artists on Friday, November 2nd. The public is invited.

Called "New Land, New Art", the works exhibited are by seven different artists, each with a story to tell, and each committed to their art.

The exhibit opening is Friday, November 2, from 6-8pm. It features the music of the Wesleyan String Ensemble.

Posted by Rolande Duprey at 2:47 PM No comments:

WEST HARTFORD, CT (WFSB)- A number of synagogues in Connecticut are hosting vigils today in light of Saturday’s shooting in Pittsburgh that left 11 people dead and 6 wounded at the Tree of Life Synagogue.

The Temple Adath Israel in Middletown will be holding a vigil at 7 p.m. at the Wesleyan University South Green. 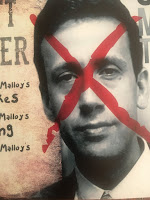 The money comes from a pac called Change Connecticut which appears to be funded by the Republican State Leadership Committee and by people like the Koch brothers and Betsy Devos.

"They're on track to spend $300,0000 in these last days leading up to the election," Lesser explained.

Lesser is not the only Democratic campaign targeted.  According to the Hartford Courant, Change Connecticut has target Steve Cassano of Manchester, James Maroney of Milford and Norm Needleman of Essex.

Both Lesser and Charamut qualified for public funding in Connecticut, limiting their own campaigns to expenditures of $100,000.  Lesser says he has no out-of-state funding for his campaign.

"That's more than enough money to run a campaign for a State Senate seat," Lesser said.  "The additional money from the pac is drowning out the conversation we ought to be having here in the state."

Campaign finance laws allow pacs to spend money on campaigns, and those same laws make it nearly impossible to determine who is spending the money, and what their goals are.

"It's an astroturf campaign," Lesser said.  "The spokesperson is a guy from New York who says the pac is concerned with taxation in Connecticut."

Republicans have had a decades-long campaign to gain political control at the state level.  The so-called "50 state solution," has been very successful in gaining control of state legislatures and governor's seats in many states.  By 2015 Republicans controlled 70 percent of state houses and senates.

In Connecticut, there is a one seat difference in control of the State Senate.  Democrats currently hold that control.  And while, there is a larger Democratic margin in the House, analysts say that in this election, Republicans could win enough seats to take control there.  And current polls put the governors race as neck-in-neck.

Republicans have used the "50 state solution" to gain state control, because  many regulatory and legislative policies are made at the state level, from gender rights and education to voting rights and healthcare.

"I think it makes a mockery of Democracy," Lesser said.  "Out-state-interests are trying to buy control of the State Senate.  I should be flattered by the attention, I guess, but this is a vast amount of money trying to drown out the voices of state residents."

Lesser has been outspoken in his defense of a student loan bill of rights, and was the principle author of a 2015 Connecticut law protecting those rights.  Education Secretary Betsy Devos, and her Department of Education under the Trump administration, have favored loan makers and not borrowers, and filed a lawsuit attempting to clock Connecticut from enforcing a law protecting those student borrowers.

"All I want is an even playing field," Lesser said.  "I'm going to keep running my campaign they way I have been.  I care deeply about the cities I would be representing.  For Middletown, a Republican win in the Senate would be catastrophic." 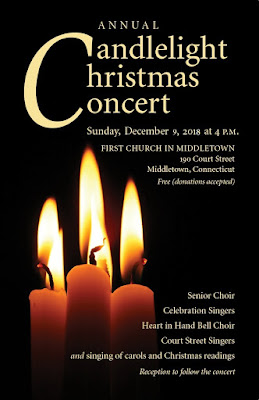 Seasonal Singers — Come rehearse with First Church choirs in November and then sing at our Annual Candlelight Christmas Concert in December.

First Church has two voice choirs — the Celebration Singers and the Senior Choir.

The concert on December 9, at 4pm, will last about an hour and a half and will be followed by a buffet-reception for friends and family in the parish hall. For more information, please contact Minister of Music Shari Lucas at shari.lucas@sbcglobal.net or at the church office, 860-346-6657. Find us
on Facebook at First Church Middletown.

House of the Rising Sun: First Church in MIddletown

ROCK of AGES
on Court Street
Saturday night was a night to remember.  Local icon Fred Carroll owned the newly refurbished Sanctuary at First Church on Court Street with his explosive drumming and strident vocals, as First Church Minister of Music Shari Lucas accompanied him on keyboard and organ, and Old Man Rick chimed in on harmonica in the Rock of Ages concert.

Opening with "I Like Black Coffee," a muppet-worthy rant, and I suspect a Fred Carroll original, The Band paced through a long set that included a cover of "Spoonful," the “Theme from Peter Gunn," and other familiar numbers, then drew up to closing with an epic round of "House of the Rising Sun" that truly shivered the 150-year-old timbers of the sanctuary and almost had one wishing for earplugs!


Believe me, you haven't heard anything until you've heard "House of the Rising Sun," with Fred Carroll wailing to the sound of First Church's magnificent, newly refurbished Austin pipe organ! ... Its tones blessed us all as Shari orchestrated its thrumming thunder; and Rev. Julia Burkey listened, enraptured like the rest of us, from a pew in the center-left aisle.

But it was entirely Fred's show: Hair whipping, elbows jutting, sticks flying—not unlike Animal of Sesame Street fame, I thought. The event was attended by a select and rambunctious, but not disorderly, audience. —
Posted by caritas at 3:22 PM 7 comments:

Eco-boardgame Night at the deKoven House This Friday 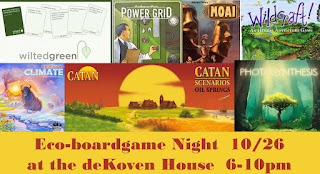 There are lots of great eco-themed boardgames out there. On Friday October 26th, from 6-10pm, we’ll take over the two meeting rooms at the deKoven House Community Center (27 Washington Street) and turn them over to gaming! Join the Rockfall Foundation and try to save the world, green your power supply, grow some trees, adapt to a changing climate, or just make some risque green jokes.

Drinks and snacks will be served!

Game list below. And thanks to the Board Room for sharing some games to expand out our play list!

Posted by Rockfall Foundation at 10:15 AM No comments:

Death by Design Next Film in Environmental Film Series

Death by Design, the second film of the 2018-2019 season of The Elements: An Annual Environmental Film Series, will be shown on Monday, November 5, 2018. The film investigates the underbelly of the electronics industry, from factories in China, to a NY community, to Silicon Valley, and shows how our ever-present smartphones, tablets, laptops and personal computers have deadly environmental and health costs (www.deathbydesignfilm.com).

The film screening will be held at 7pm in Chapman Hall on the campus of Middlesex Community College, 100 Training Hill Road, Middletown, CT.  Parking is available in the main lot as you enter campus. As always, the film is open to the public and free of charge.

Additional films in the 2018-2019 series are:
Growing Cities, February 4, 2019 at Wesleyan University, Powell Family Cinema, about urban farming in America and how much power it has to revitalize our cities and change the way we eat (www.growingcitiesmovie.com)
Anthropocene, April 1, 2019 at Middlesex Community College, Chapman Hall, about the potential of a new geological epoch coined the Anthropocene, describing a planet shaped more by mankind than by nature (www.anthropocenethemovie.com)

Following each film, an informal discussion is led by an expert in the film’s topic. Join us for one or all of the screenings! Please phone the Conservation District office for more information at 860-346-3282.

The Elements: An Annual Environmental Film Series was begun in 2015 by the Connecticut River Coastal Conservation District, Middlesex Community College Environmental Science Program, The Rockfall Foundation, and Wesleyan University's Center for the Arts and College of the Environment. Additional sponsors include Wesleyan’s College of Film and the Moving Image.

The Connecticut River Coastal Conservation District, Inc, a nonprofit organization based in Middletown, CT, works to conserve the natural resources of towns in the lower Connecticut River watershed and coastal areas. For more information about District technical and educational programs and services, visit our website at www.conservect.org/ctrivercoastal. 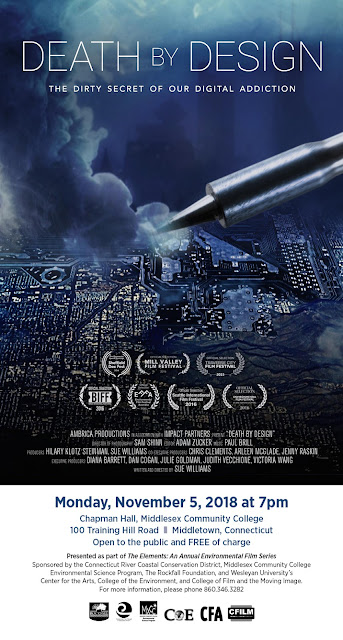 Posted by Jane Brawerman at 2:07 PM No comments:

Cat Tales ~ Kittens of the Week! 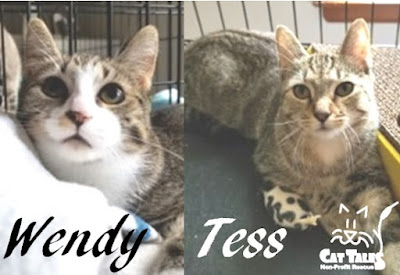 We're Wendy and Tess, kitten sisters who were rescued from streets of Middletown. We love spending our time with people once we know them. We are still a bit nervous, so a home with older children or just adults would be ideal; people who understand we are shy and and are willing to take the time to make us feel loved and safe. We need someone who can give us lots of attention. Once we know and trust you, we're total love bugs who can purr up a storm. We're playful and love our toys and treats. We'd love to be adopted together but can be adopted separately. Come visit us and see how cute we are!


Posted by CatTalesCT.org at 1:40 PM No comments:

The Westfield Residents Association invites all Middletown residents to its Annual Meeting and Meet the Candidates Forum tonight, 7PM, October 22, 2018. The event will be held in the Fellowship Hall at the Third Congregational Church on Miner Street in Middletown. There is no charge to attend.

The following candidates have indicated they will attend:

Free street parking until 10am, every day!

For further information, click here.
Posted by caritas at 7:27 PM No comments: