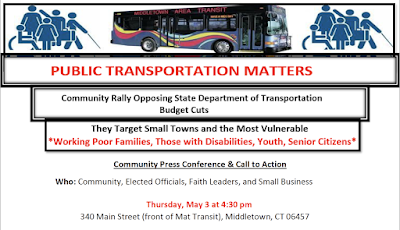 Local activists have planned a Community Rally in support of public transportation serving our city.


Middletown Area Transit  is a State and Federally funded transit agency. Last month the State Department of Transportation proposed a 15%, $260,558 cut to MAT transit funding that will significantly reduce bus services to all of our city, as well as Cromwell, Portland and parts of East Hampton and Meriden.

In addition, due to severe reductions to MAT Transit bus services, many unemployed and the working poor will be disenfranchised from the new jobs coming to our city, including FedEx Ground, which is located at the old Aetna site, and is scheduled to open this August. FedEx Ground representatives has stated that the new distribution center would hire as many as 160 full-time employees and 220 part-time employees in 2018 before the operation enters its full phase. In the future, FedEx will be able to employ 400 full-timers and 600 part-timers.
Posted by Stephen H. Devoto at 3:00 PM