The Planning and Zoning Commissioners voted to amend the Zoning Code at their meeting Wednesday night, to allow organizations like Amazing Grace Pantry to run a food distribution center in the Industrial Redevelopment Area (IRA) zone. They also approved the use of the former grange on West Street as a daycare building, and received updates from the Zoning Enforcement Officer about two controversial properties.
Food Distribution Code Change
St. Vincent DePaul Place, a ministry of the Catholic Diocese of Norwich, operates the Amazing Grace Food Pantry and other programs to help the poor. They have been given a generous

donation which allows them to purchase a building currently owned by Suburban Stationers on Stack Street in the North End. This building would triple the space available to Amazing Grace, which currently operates out of very cramped quarters on Main Street Extension, near
Stop and Shop. However, food distribution is not currently permitted in the IRA zone. The proposed code change would allow "warehousing and distribution of unprepared food products at no cost to the public for consumption off-site" in the IRA zone. 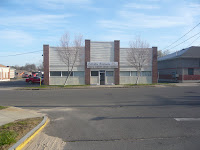 Ron Krom, executive director of St. Vincent DePaul Place, told the commissioners that Amazing Grace distributed an average of 24,000 food items per month in 2008. He noted that their donations tended to be episodic, and the larger location would allow them to store donated food to be distributed later.

Amazing Grace was forced to turn away a significant amount of rice from Wesleyan (after "The Rice Show"), because they did not have sufficient space to store and re-package the grain. 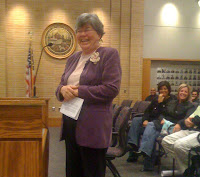 The owners of many different businesses surrounding the
property to be used by Amazing Grace all expressed their support for the text change, which they felt would enhance the IRA zone.
Mayor Sebastian Giuliano also expressed his suport, "Amazing Grace is one of our success stories... Any time you can help a group like this, you've done what some people call a 'mitzvah'."

About 60 people came to support the application. Krom said that they included supporters, volunteers, and users of the Food Pantry. They cheered every speaker, particularly Betsy Morgan, who spoke as Director of the Middlesex Coalition for Children about the importance of Amazing Grace in relieving hunger and food insecurity among children in Middletown.

The Commissioners passed the text change unanimously, an action that received delighted cheers from everybody in the room.

Adaptive Reuse of a Grange Building.
There is old saying that the most valuable crop a farmer can raise on land today is houses. Since houses usually come with children, it seems particularly fitting that the Mattabesset Farmer's Grange at the corner of Butternut and West Streets has been proposed to be used as a child care facility. 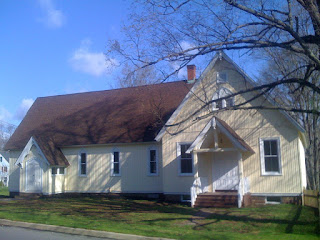 John Milardo applied to operate such a facility as a special exception in the M zone. He proposed a modest expansion of the grange building, and the construction of a parking lot and outdoor playground to accommodate 48 children and the appropriate number of staff.

The Milardo family has already done an enormous amount of work transforming the Grange into a day care and preschool center. They have built new walls inside, they have plans to use the basement for a children's play area, they have replaced all of the original windows, and they have sheathed the exterior in vinyl siding.

George Easternal, who lives on West Street did not mind the placement of the parking, but he expressed concerns about the traffic and the safety of cars at the intersection of West and Butternut. Beth Emery expressed her concern that no traffic study was done regarding this issue.

The public comments and discussions by the commissioners led to a few conditions being added to the ultimate approval. Commissioner Borelli expressed his desire for a white vinyl fence surrounding the play area, and Commissioner Bolz suggested narrowing the driveway for the parking lot exit. Commissioners unanimously approved the application with these conditions.

John Milardo's wife told me this morning that the family was elated to get approval. She objected to the idea of a white vinyl fence, because it would destroy the open woodland feel of the corner, but she hoped that a wood fence might not change the character of the corner lot too much.

Bill Warner says there will be testing of Kolman property water after composting begins again.
Bruce Driska, Zoning Enforcement Officer, was asked by Commissioner Carl Bolz about the status of the Higby Road property which has been used for a privately owned leaf composting operation. This operation, run by John Kolman, has taken the city's leaves for the past 15 years. The composting operation has generated a lot of heat at several P&Z meetings, after neighbors complained of violations on the site, and the state Department of Environmental Protection issued Cease and Desist orders to stop the composting business.

Driska said that all of the water tests had returned "unremarkable findings per our health department." Commissioner Ron Borelli asked Planning Director Bill Warner if the property owner would be required to test the water as was required by P&Z when they approved the special exception for the composting operation in 1993. Warner replied, "Once the composting begins again, we will test the water."

Magnolia Returns
Driska reminded the Commissioners of a property that they had approved for a special exception only last October. This property, on Magnolia Road near Farm Hill, was approved for a very large two-family house. Driska said that he had fielded calls from several neighbors who were very upset about the size of the newly constructed house, concerned that it violated the maximum height restrictions of the zoning code. Driska admitted that the walk-out basement in the back gives the house the appearance of a three-story house. However, he said that when measured according to the code, it was only 28 feet tall (code has a maximum of 35 feet).

Driska reminded the commissioners that they had expressed misgivings about the building in their discussions, and suggested that they should have acted on those misgivings (only Commissioner Johnson and former Commissioner Matt Lesser voted against the application).
Warner pointed out that the same house on a different lot would not seem out of place. There was a brief discussion about the importance and the difficulty of writing zoning laws that lead to coherent and attractive neighborhoods.

Quiet Affairs
The Commissioners dealt with their Commission Affairs quickly and quietly last night. The election of a chair was postponed to the next meeting and Borelli gave a quick report on the committee charged with revision of the Bylaws. Johnson thanked Borelli for coming to her session on the Plan of Conservation and Development last Thursday, which dealt with farmland and other open space in Middletown. Johnson said the next session would be on May 21st, and deal with transportation issues.

Finally, Johnson suggested that the Commission invite the town planner of Hamden, Leslie Creane, to speak at their May 13th meeting. Creane is expected to speak about the principles of Smart Growth, which the city of Hamden is in the process of putting into their Plan of Conservation and Development. This suggestion was endorsed by the Commission.
Posted by Stephen H. Devoto at 10:00 AM