"We have reached a point of cavitation"

The Planning and Zoning Commissioners deliberately scheduled very little zoning business for their meeting on Wednesday night, in order to have time to devote to Commission affairs. Unfortunately, under Commission affairs, they failed again in their biweekly attempt to elect a new chair, and did no more on their bylaws than discuss how to discuss them.

Elections in Winter
Election of the chair of the Planning and Zoning Commission requires 5 votes on the 7 member Commission. Since no one political party can hold more than 4 seats, this ensures that the chair must receive at least one vote from each party. At the December 10th meeting, two Democrats were nominated for chair, Deborah Kleckowski and Barbara Plum. Kleckowski received 4 votes (3 Republican and 1 Democrat), while Plum received 3 votes (all Democrat). As neither received the necessary 5 votes, Plum asserted that she would remain chair until November of 2009.

During all of the meetings of January, February, and March (five, one was snowed out), Barbara Plum was absent, and vice-chair Richard Pelletier acted as chair. Under his leadership, the Commissioners discussed parliamentary law, state law, the city charter, and P&Z bylaws, and continued in their attempts to elect a chair. Alas, these discussions did not alter the outcome, and Plum and Kleckowski continued to be deadlocked, 4 - 3.

Cavitation in Spring
Spring has returned to Middletown, and with the unfurling of the Magnolia Blossoms, Barbara Plum returned to the P&Z on Wednesday night. Pelletier continued to act as chair, and Plum returned to being a "regular member." Pelletier again called for a vote for chair, again Plum and Kleckowski were nominated, and again Kleckowski received four votes to Plum's three. 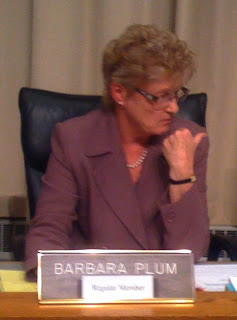 At this point, Les Adams, clearly exasperated by the failure to elect a chair, requested official clarification on the meaning of the word "majority". Other Commissioners, as well as Planner Michiel Wackers, informed Adams that the state and city statutes, as well as the P&Z bylaws, were very clear about what kind of a majority needed to exist for
election of a chair. Pelletier put it best, "Webster's dictionary does not apply to this committee." Adams' rejoinder was the enigmatic, "We have reached a point of cavitation." For you, dear reader, I will offer an explication and my own interpretation of this nugget of wisdom below.

Discussions about discussions about bylaws.
The P&Z Commission's bylaws have been periodically updated, and several commissioners have suggested revisions to the current bylaws. These suggested revisions include such things as limiting how late the meetings can go, requiring commissioners to visit the sites impacted by planning decisions, requiring attendance at a minimum number of meetings. The Commissioners spent about an hour on how to approach these bylaw revisions.
There was extensive debate over whether a "committee"or a "workshop" should be set up to suggest bylaw revisions. Those in favor of a committee said that all willing commissioners could be on the committee. All of the commissioners seemed to argue that there was not really any difference between a workshop and such a committee, while at the same time arguing quite forcefully that one or the other was far preferable. Ron Borelli's motion to establish a committee passed 5-2, with only Plum and James Fortuna voting against it.

Borelli promised to arrange committee meeting(s) that would allow all interested commissioners to attend. Almost all of the commissioners, including both Kleckowski and Plum, volunteered to work on the bylaws.
Cavitation and the Commission: a Commentary
I was flummoxed by Adams' pronouncement, "We have reached a point of cavitation," to describe the repeated failures to elect a chair. Commissioners seemed to share my bewilderment. However, a little research into the word helped me to realize that this might in fact be an apt description of the state of affairs on our city's Planning and Zoning Commission.

Cavitation occurs when the very rapid flow of a fluid over an object leads to the formation of a gas bubble on that object. When that gas bubble collapses, it generates shock waves with such enormous energy that they can cause serious damage to the object. This collapse, or cavitation, is a major cause of damage to propellers. Without knowing any more than what I learned in the Wikipedia entry on Cavitation, this kind of damage is to me an utterly unpredicted outcome of the energy of a flowing liquid. Most of the Planning and Zoning Commissioners bring enormous energy to the affairs of the Commission. The city benefits from this energy when it is used to critically examine and deliberate over what are usually the most critical decisions a municipality can make: how to
use its land. However, in the past six months or so, it seems at times that when the Commission turns inward, this energy causes the Commission to spin more and more rapidly in circles. Matters such as bylaws, the Plan of Conservation and Development, and election of officers seem particularly susceptible to this. Like water flowing rapidly over a propeller, all of this energy may have unintended and damaging consequences to the functioning of the Commission.
Engineers, using the principles of fluid dynamics, can design propellers to prevent and/or withstand cavitation. It is in the interest of all the residents of the great city of Middletown for the Planning and Zoning Commission to do the same for their affairs.
Posted by Stephen H. Devoto at 5:00 AM

Cavitation! Thanks for the addition to my vocabulary and the informative explanation of why P & Z cannot get its act together.

This is ridiculous. To spend time debating how you'll debate... kick them all off and let a new group decide!

It is a shame that the Planning and Zoning Commission has struggled to elect a Chair. However, it is disturbing that the reason is due to partisanship. It is inconceivable that my friends on my side of the isle are more beholden to a person than to the simple principle of leadership being present. The inability the Planning and Zoning Commission ought not be based on politics or likability but rather the ability of a Chair to facilitate the meetings and to conduct the business of the city in a professional and thoughtful manner, regularly.
The challenge to the previous Chair's nomination was not brought forward due to party politics but rather because of the desire of commissioners to have a leader who is present to lead. In addition, the current combination of commissioners has brought to the forefront high-spirited discussion regarding the future development of the city in general, and the updating of By-laws and codes more specifically. As a whole, this is an exceptional commission comprised of a dedicated group of private citizens who volunteer their time!

If it is such that neither myself or Commissioner Plum are to be elected Chair, fine. However, I ask my fellow commissioners to take a hard look at why the election of a Chair has been stalemated. This is an era of change, a swan-song to be sung to the status quo. I ask, "is not time to move on?"

To the public, I thank you for your support and patience throughout this entire election process. Crisis does breed change and in the end the Planning and Zoning Commission will emerge better educated in all areas of land use. Most importantly, the commission will be better prepared to serve the community and to more efficiently and effectively conduct the land use business of the great city of Middletown.

About Deborah's comment....I'm not on P&Z, but if I was, I think I'd vote for someone who laid things out as clearly as she did. We need the commission to educate themselves, be dedicated and be thorough. There is always a lot of pressure from lawyers, from politicians, from neighbors and from staff. There needs to be an open atmosphere where ideas can be discussed and solutions found. That's the opposite of the partisanship (not necessarily by party but by coalition) that we have now.

I dont understand why one would even want to elect a person who is absent for 1/3 of all the meetings to be held...There is a commitment shown at least by Klekowski.

The Republicans have the smarts to see this and vote the correct person in.

Why dont the Democrats see this to?

The disinterested Chair should do the right thing and resign. What the heck is she doing/not doing serving on a commission she is not serving?! This is some sort of Catch 22 craziness. Deb says all the current commissioners are exceptional, dedicated, etc. but the facts speak volumes that there may be an exceptional insufficiency in their thinking prowess, to participate in such a long,drawn out farce!

I second that!
Ms Plum, please remove yourself from consideration as chair of P & Z. You can better serve the town by doing so. I would have no problem with your remaining chair, if you where not so committed to missing a third of committee meetings. Shame on Commissioners, Pelletier and Furtuna for continuing to support the election of a chair who is MIA during the year. I, for one will withhold my vote for your re-election when your term expires.
I think Ms Kleckowski has shown she can do a good job as chair. Mr. Pelletier, and Mr Furtuna, look at it this way, if Ms Klechowski proves she is not well suited for the job, she will only have it for 7 months, before the November re-election for chair of the commission comes about. What do you have to lose? I urge you to rethink your vote, and vote for change at your next commission meeting, and do the right thing for Middletown.