The Planning and Zoning Commission met Wednesday evening to consider several applications for subdivision or special exceptions to the Zoning Code. There was extensive discussion over two of the properties during the public hearing portion of the meeting. There was also extensive discussion regarding a property on Higby Road that has been found in the past to be in violation of the city's zoning regulations.

29 Magnolia Avenue, near Farm Hill Road. In an application whose public hearing was continued from the October 8th meeting, Chatham Construction represented the lot owner, who has applied to put in a two family dwelling on a lot with less than the minimum 100 feet of street frontage. Several neighbors raised objections to this plan, because they feel that the two-family rental nature of the house would adversely affect their property values, and they are concerned about traffic. Several commissioners were skeptical of the neighbors, pointing out that usually a big fancy house raises the value of surrounding properties. Commissioner Catherine Johnson tried to get Sal, one of the neighbors to clarify whether he was afraid of the unknown, or whether it was renters in general that he was opposed to, Ms. Johnson asked him, "If Michelangelo designed the house, and Mother Theresa lived in one and (Commissioner) Les Adams lived in the other, would that be an eacceptable use?" Sal assured her that even if he knew who the designer and the renters would be, he would still oppose the construction of a two family house on the lot. Commioner Matt Lesser said that with the concerns he heard from the neighbors about their property values, he would not support the special exception. The design for this house included a horse-shoe shaped driveway at the front of the house, and both Johnson and a member of the public (Jennifer Saines) spoke in opposition to this feature of the plan. Ms. Johnson also raised the spectre of a citizen's proposed ordinance which would ban parking between the house and the street. Commissioner Ron Borelli said he felt uncomfortable holding somebody to an ordinance that does not yet exist, and pointed out that the Police Department had approved the traffic implications of this plan. Borelli proposed a friendly amendment that approval be subject to the condition that the semi-circular driveway be eliminated in favor of a traditional driveway. With this amendment, the special exception was approved, 5 - 2 (nay votes were Lesser and Johnson).

32 Coe Avenue. Attorney Ralph Wilson, engineer Pat Gorman, and architect Steve Rocko presented plans for construction of a new building to house the Shiloh Christian Church, and an associated 70 parking spaces, to be placed on 1.6 acres between Coe Ave and Saybrook Road. The development had received approval from the Inland Wetlands Commission, which is required because part of the property contains wetlands. It had also been reviewed and approved by the Greater Middletown Historical Preservation Board, because the new building would move the congregation from their original church built in 1872. This original church, on East Main street near Stop and Shop, is too small, has no parking, and lacks many of the 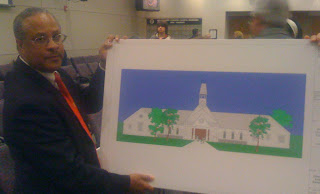 features common in modern churches. The new construction would not only leave the old church with no further reason to exist, the plans call for the incorporation of the belfry, all the stained glass windows, and perhaps the facade of the old church in the new church. Johnson criticized the architect and the engineer for their design, which she claimed "embodies everything about what people consider urban sprawl." She challenged the assumptions underlying the need for 70 parking spaces, but Pastor Paul Hylton (shown in photo with the plans for the new church) assured her that with 130 members this was if anything too small a number. Johnson offered several new designs to the engineer and architect, and expressed her regret that they had not consulted her earlier in the process.
In the end, all of the commissioners supported the church's plans and the subdivision and Site Plan were approved unanimously. 30 parishioners of the church were at the meeting, an ethnically diverse group of all ages, almost entirely from Middletown. When the vote was taken, they burst out in joyful clapping and cheering.

106-110 Court Street, construction of an outside deck and bar. This was tabled.
Plan of Conservation and Development updates to Chapter 6 (Future Residential Growth) and to Chapter 9 (Promoting Commercial/Industrial Growth). Tabled until public hearings on all chapters have been held.

17 North Main Street. Robert Carlson requested zoning approval for a used car lot. He is a new owner of an existing company and needs P&Z approval to continue use of the property to sell used cars. 4-5 cars will be on the lot at a time. Approval was granted.
496 Saybrook Road. Medical spa consulting and development, special exception for business and professional offices. A public hearing was scheduled for the November 12th meeting.
Plan of Conservation and Development update. Public hearings for Chapter 7 and Chapter 10, which deal with Natural Resource Protection and Maromas, were scheduled for the December 10th meeting.

The other topic of discussion, brought up both under the Zoning Enforcement Officer's report and in the discussion with the public, was the use of land on Higby Road which is bisected by the border between Middletown and Middlefield. Trucks from throughout the area are bringing in asphalt, bricks, and construction debris to mix together on site into an aggregate that can be used in road construction. The owner of the property has been served with a cease and desist order to stop infilling. The site is also the target of a Department of Environmental Protection investigation for filling without a permit. Bruce Driska, the Middletown Zoning Enforcement Officer, stated that the owner is complying with the cease and desist order, and is now solely filling on the Middlefield side of the border. A member of the public, Eleanor Kelsey, told the commission of her woes with rodents this year in her garden (only 6 turnips to show for a 60 feet row, and one of those was hollowed out). After discussing all the possible reasons for the rodent infestation in her garden, she pointed her finger squarely at the same property. It appears that the City of Middletown has contracted with the owner of this Higby Road property on the Middlefield/Middletown border to compost all of the city's leaves. The resulting piles of leaves and wood chips are, according to Ms. Kelsey, the root of her rodent problem. She asked that the city do something about it. The commissioners agreed to review the permit which allowed leaf composting to be done on the property, to ensure that the permit was being followed. None of the commissioners had any suggestions for how Ms. Kelsey could get through the winter without her expected number of turnips.
Posted by Stephen H. Devoto at 12:34 AM