The good, the bad, and the ugly at Planning and Zoning

Poetic descriptions of Maromas provided a welcome respite from talk of lawsuits and bylaws at Wednesday's Planning and Zoning Meeting.

The Good. Maromas: Middletown's Last Frontier
The Maromas chapter of the proposed updated Plan of Conservation and Development was discussed at a public hearing. About a dozen people came to speak passionately about the issues surrounding land preservation in general, and Maromas in particular. Jeff Pierce spoke first,

demanding that the city remove from all maps any designation of open space on his property, and any designation of hiking trails on his property. Mr. Pierce, with his wife Linda Pierce, own large tracts of land on Higby Mountain, and were recently issued a permanent injunction from operating an ATV park on their property. Pierce complained that special interest groups were working for the conversion of private property into public property, saying, "[people] have this fetish that it has to be preserved." Others speaking to this chapter expressed different opinions. Katchen Coley spoke for the Conservation Commission of the importance of large tracts of undisturbed land. John Leshane, who installed the Mattabessett Trail with Stan Watson of Northeast Utilities, talked about the many features that make hiking in Maromas special, including historical, geological, forests, and the presence of old quarry railroad beds which make the hikes far more gentle that they otherwise would be. Barrett Robbins-Pianka spoke of the need to build a green infrastructure for citizens.

Commissioner Ron Borelli challenged Mr. Leshane regarding the possibility that public land preservation would take away the right of a landowner to use their land. This opened up a thoughtful and respectful discussion about how to balance an individual's property rights with land conservation.

The Bad. The Lawsuit.
A lawsuit and a possible settlement led to the very unusual situation of a second public hearing on the same proposal. The proposal, to build 38 multi-family townhouse condominiums on Jackson Street, was heard in June of 2008. Then, the commission turned down the application, but did so in a way that led to a lawsuit being filed by the developer. This lawsuit went to a pre-trial, and the judge indicated that the developer would likely win, but encouraged him to speak to the city to see if a settlement could be reached. Wednesday's hearing was for the 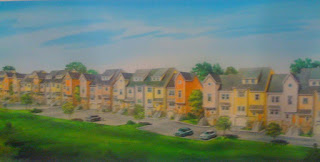 Commissioners to discuss such a settlement. Attorney Michael Dowley, representing the developer, offered convincing rebuttals to all the reasons given by the commissioners for their denial (monotonous design, lowering property values of surrounding homes, and insufficient open space). He also addressed a concern raised by commissioners about pedestrian safety on the street, saying his client would pay for a pedestrian bridge over the railroad tracks between the development and Washington Street. He repeatedly pointed out that if as expected he won the lawsuit, the developer would not need to provide this bridge.

The Ugly. Parliamentary Law discussed by Planning and Zoning Commissioners.
At the December meeting, neither Deborah Kleckowski nor Barbara Plum received enough votes to win election as chair, and Plum announced that she would remain chair for the year. However the city attorney has found that the board is currently operating without a chair. The dispute over this continued unabated on Wednesday. Several commissioners, including Catherine Johnson, Borelli, and KIeckowski, argued that a new election should be held every meeting until a chair is elected, and until that is done, the commission would have to opera

te without a chair. They also argued that an alternate member who is sitting in for a regular member (in this case, Borelli for Plum), has full voting rights. This generated extensive and sometimes heated debate about State Law, P&Z bylaws and the city charter.

The chair of the Democratic Town Committee, Daniel Russo, made an unexpected appearance at the microphone to render his legal opinion that alternate members could not vote to elect officers. Russo had been in attendance throughout the meeting, apparently for the sole purpose of sharing his opinion on this issue. Commissioner Richard Pelletier, who as vice-chair was chairing the meeting in Plum's absence, agreed with this, and refused to allow an election to proceed until the commission received further legal opinions from the City Attorney. Thus, Barbara Plum remains chair of the commssion.

Plum will not be attending any of the P&Z meetings in January, February and March.
Posted by Stephen H. Devoto at 1:12 AM

Did Commissioner Jablonski survive the meeting? Her attendance under clearly difficult, hopefully not-contagious, conditions, offered stark contrast in degree of devotion to duty vs Chairwoman Plum's winter-escape absence and dereliction. Perhaps there should be a rule against abandoning the Chair after electing yourself?

I'll second that! All those in favor? The "yays" have it!

Another way of looking at the willingness of the P&Z to meet with Dowley to work out a compromise: The Commission Caved. They agreed to a meeting without the applicant withdrawing his lawsuit. It's not a level playing field if one party brings a gun to a meeting and reserves the right to use it if he doesn't approve of the results of the negotiation.