Report Is Noncommittal On Mayoral Malfeasance

The Common Council met in a workshop on Monday night to receive the report it had commissioned to investigate Mayor Drew. The investigation was begun after allegations made by Michele DiMauro of unfair hiring and promotion decisions, allegations further elaborated on in a letter from the Managers Union. The report was non-committal or even narrowly exculpatory of the Mayor's actions in the original complaint, while raising significant concerns about his hiring practices and the role of the Office of General Counsel.

The questions from the Council were dominated by Councilmen Gerry Daley, who seemed to willfully ignore all conclusions of the report, while castigating its author for her work.

How did this get ordered?
The report's genesis was in a unanimous vote to hire an outside legal or professional firm to investigate the Office of the Mayor, and the Office of the General Counsel. Councilmen Tom Serra and Sebastian Guiliano, and Councilwoman Mary Bartolotta were designated as a subcommittee for this investigation.

Mayor Drew created controversy, and intensified the interest in the report, when he used Facebook to post a trumpian attack on the investigation, claiming it had "devolved into inappropriate questioning ..."

The controversy and interest in the report flared further when Daley raised a procedural issue about a council meeting last week at which the report was due to be released. His efforts delayed the report's release one more week.

About 40 people gathered in City Hall on Monday evening to hear from the Attorney Penny Mason. The Mayor opened the meeting and immediately recused himself, moving to a seat in the audience between his wife Kate and his new Chief of Staff Sarah. 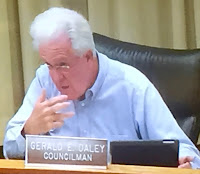 The ingredients
Attorney Mason read her report to the Council (FULL REPORT). She said she had done 29 interviews of current and former city employees, including the Mayor, 2 attorneys in the Office of the General Counsel, and 3 employees in the Human Resources Division. She stated that the other 23 interviews were with people who asked to be interviewed.

The number of people who asked to be interviewed seemed to be a surprise, and caused the investigation to take longer than expected.

Daley aggressively repeated the Mayor's Facebook accusation that the investigation had asked inappropriate personal questions. Mason replied that since the mayor himself had raised the issue, she felt free to discuss the questions she thought he might have objected to. She said she had asked General Counsel Brig Smith why he had moved to Connecticut, and asked him about a work-related allegation that was brought to her by a personal connection of his who reached out to be interviewed for the investigation. He denied that his legal work for the Drew campaign had been done on city time.

She also disclosed that she asked Deputy General Counsel Kori Wisneski about a fundraising event held at her house for Drew.

The nothingburger at the center of the plate
Mason's report did not reach a conclusion on the central claim:


With regard to the DiMauro claim specifically, several interviewees reported that the Mayor stated that she would not be getting and/or did not deserve a raise, and that he commented about her being related to certain Common Council members. These allegations were discussed with the Mayor, who denied them. We cannot conclude one way or the other that the Mayor actually influenced the process. We note that DiMauro and another employee have discrimination and retaliation claims pending with the Connecticut Commission on Human Rights and Opportunities. We therefore defer to that process to resolve those complaints.

Several Council members were dismayed at the lack of certainty and evidence around this central complaint.  Grady Faulkner commented, "It bothers me that we don't have anything to hang our hat on."

Mason reiterated, "If our investigation had turned up evidence of wrong doing, you would have seen that. But it did not."

But is there meat in those side dishes?
Mason's report raised a number of what it called themes and/or concerns, "We ... note that these concerns were raised by almost two dozen City employees, thus meriting thoughtful consideration by the Council."

A general concern, alluded to in the report and elaborated on in person, was a fear of retribution. The report notes that while the administration was given a chance to respond to some of the specific complaints, this was not true of all of them, "given that numerous interviewees had requested anonymity." To the Council, Mason said that some of the interviews took place outside of Middletown, "Some [interviewees] did not want to be seen by security cameras coming into city hall."

First on the list of specific concerns was that the General Counsel's office is too enmeshed with the Mayor's political ambitions, some called it the "Mayor's personal law firm."  This was particularly problematic, because Human Resources Department reports directly to the General Counsel, raising concerns that personnel decisions are connected to political ambitions. The report recommended separating the Human Resources Department from the General Counsel Department, and perhaps assigning a separate legal counsel for the Office of the Mayor, so that the department is focused on serving the city, not the mayor.

A second category of concern was that candidates were "'pre-selected' for open positions based on political support for the administration or on a personal relationship." No specifics were offered, the report did not mention the hiring by the mayor of Geoff Luxenberg, his campaign manager, to work for the city. The report suggested several changes in the hiring process to ensure that merit was an important consideration.

You should have asked us to prepare this.
Most of the Council members who spoke attacked the entire process of the investigation and ignored the themes raised by two dozen City employees.  Daley spoke 4 different times, peppering Mason with questions and interrupting her answers nearly as fast as she could start giving them.  He insisted on knowing if she had social relations with anybody in city hall. He asked her about nearly a dozen specific city documents related to employment and the organization of the workforce, she had read them all.

He read her the Council resolution authorizing the investigation, and later offered to read it again.

Daley also informed her of the backdrop to the investigation, "In reality this all occurred in a political environment; ... were some of these [witnesses] disgruntled employees?"

Mason answered, "I did not get that sense."

Santangelo explained to Mason that she should have come to him and to other Council members for help in identifying employees who could give a different perspective from the one given by the two dozen she did interview.

Councilman Nocera carefully explained what the proper methodology for this investigation should have been, "Best method is one called constant comparison," adding, "I hope in the future you will use that method."

What next?
Daley indicated that he wanted to get all of the details of the investigation, including invoices without any redactions of names. He claimed that if Attorney Mason was hired by the Council, as a member of the Council he was entitled to all of the information that she collected.  This appears to be another attempt to obtain the information about city employees that the Mayor is also attempting to obtain through his Freedom of Information request for city employee communications regarding the investigation.

Mason told the Eye that she would take his request "under advisement". She seemed unlikely to break the confidentiality of the interviews.
Posted by Stephen H. Devoto at 12:33 AM

Not really all that bizarre from my perspective. Stay tuned for more and really pay attention folks.

This sound like when Mayor Maria Madsen Holzberg, was in office, same old story. Just this time it’s not people of Color, making the complaints.
What Ms. DiMauro and another employee, who have discrimination and retaliation claims pending with the Connecticut Commission on Human Rights and Opportunities. Should do (read Middletown Press from during time Holzberg was Mayor) should do is request an investigation by U. S. Attorney General Office. Back then the local investigation render the same as this one on Mayor Drew. But when the U.S. Office of Attorney General investage, they found that there was wide discrimination and retaliation, practices going on than just like now.
I learned that the people who were successful back then still live here in Middletown, Ms. DiMauro, I like to recommend you reach out to them.

Thank You for that information