These are the communications Daley has shared with the Middletown Eye, in chronological order:

From: Gerald.Daley@MiddletownCT.GovDate: August 14, 2018 at 12:27:25 PM EDTTo: Linda.Reed@MiddletownCT.GovLinda :At last evening’s Common Council workshop, Attorney Mason indicated that the billing / invoices from LeClair / Ryan regarding their recent engagement by the Common Council were submitted through you.The copies of theses billings / invoices available through the City Finance Department had numerous instances of missing pages of supporting documentation as well as large sections that were redacted.Since it appears that you received the original billings / invoices prior to submission to the Finance Department for payment, please provide each member of the Common Council with copies of the complete billings / invoices as received, with all supporting documentation that was included.  We need this information to determine exactly for what work we paid.Also, please advise who, if not you, is responsible for withholding the missing pages and redacting the sections that were obscured.  If you are responsible, please advise who instructed / authorized you to omit such information from what was submitted to the Finance Department.Finally, I request that you make this information available to each member of the Common Council (i.e. LeClair Ryan’s client) by the close of business tomorrow and advise if you will transmit it via e-mail or if we should pick it up at the Council office.Thank you.Gerald E. Daley 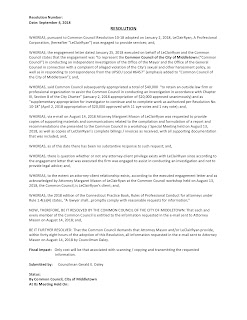 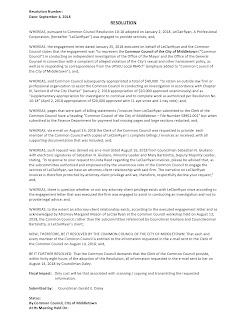 Posted by Middletown Eye (Ed McKeon) at 9:52 AM

I have an idea of how to get to the bottom of all of Councilman Gerry Daley's questions. Have the Mayor, the City Attorney's, and the Human Resource Director take a polygraph test. All results are final! Save the taxpayers' money and put an end to all this BS!