City Residents Honored For Their Motorcycles 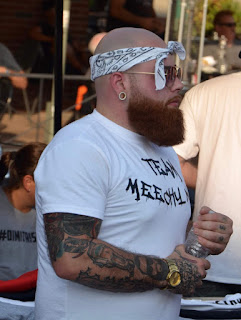 Modified from Chamber of Commerce Press Release.
----------------
This year's Motorcycle Mania is over, having seen more than 7,000 bikes and over 12,500 spectators fill our downtown area for what has become the largest one day summer motorcycle event in New England.

Photos of the event are HERE.

Chamber President Larry McHugh noted, “The 13th Annual Middletown Motorcycle Mania was a huge success. I want to thank our sponsors, our vendors, City of Middletown personnel, especially the police, fire, public works, Mayor Drew, The Common Council and everyone who came out to support the event. Finally, I want to express my sincere appreciation to Event Chairman Rich Greco and our over 100 volunteers for their unbelievable support of Motorcycle Mania. This event gets bigger every year, and we are proud that its proceeds go to support Middletown youth programs. We are already looking forward to next year.”

The show bikes that were entered for awards were impressive, and the following motorcycle owners from our city won awards:


For more photos of the event, SEE HERE.

With Middletown's rich history in motorcycle development it is only right that the city holds the biggest motorcycle show in the best. Robert M. Keating (The Keating Wheel Company) developed , patented and commercially sold his motorcycle in 1901. Around the same time the Indian prototype was being developed about a mile away in middletown. The city on Middletown should look into developing this history for tourism, and other economical development such as a museum or official recognition of some sort. There are not many towns who can say they have such a historical place in modern transportation history in the USA.

read about it in the book: Wheel Man: Robert M. Keating, Pioneer of Bicycles, Motorcycles and Automobiles

Anyone surprised the motorcycle rally is supported by an ambulance company, a personal injury law firm and a bar? Why were all those bike owners not ticked for excessive noise?

I am curious about the cost of hosting this event and if this has a positive impact on downtown businesses?

..."the largest one day summer motorcycle event in New England." The conventional wisdom is that there is no such thing as bad publicity. But, really, do we want Middletown to be known for this sort of notoriety?

Fine, we'll keep it as "Mentaltown" then.

The level of noise created and condoned (or applauded) is a great disservice to many residents. These events do not contribute to Middletown's being a pleasant place to live and work, nor does the everyday loud motorcycle noise on our streets.

Each year it is widely reported that the proceeds go to support youth programs in Middletown, but I have never seen a report of the actual amount that is donated. Anyone know the total donated for last year, or any year?

Just because it doesn't suit your taste Paul, be alittle bit more open minded, tolerate and liberal in your thinking and don't ruin it for others. The bikers never cause problems and many families enjoy this event dedpite the Eye's mocking tone.

Would you like at least a bike a minute roaring past your house until after 11pm? Not what I would call "never cause problems".