It was an unusual moment in Council Chambers. 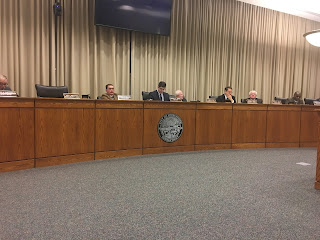 Not a single member of the Common Council wanted to discuss the resolution.

A resolution was made to fund an independent investigation of the office of the mayor and the city counsel based on complaints alleging gender discrimination .  Typically when a motion is made, Council members jockey for cable face time as they explain why they are voting for or against a motion. 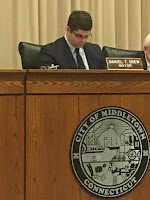 The resolution was read: Approving a waiver of §78-10, Contracts for Professional Services, of Chapter 78 of the Middletown Code of Ordinances to allow for the hiring of an outside law firm or January 2, 2018 COMMON COUNCIL MEETING Page 4 professional organization to assist the Common Council in conducting an investigation of the Office of the Mayor and the Office of the General Counsel as well as in responding to the letters from members of UPSEU Local #6457 Union Executive Board; and approving that a subcommittee, comprised of the Majority Leader, Deputy Majority Leader, and Minority Leader, be appointed and authorized to sign an agreement on behalf of the Common Council to retain such outside law firm or professional organization and that a majority of signatures of said subcommittee shall suffice to authorize such an agreement; and authorizing that such agreement shall provide that a report of findings and recommendations shall be completed by such outside law firm or professional organization within sixty (60) days of execution of the agreement, unless such report date is extended by the Common Council; and authorizing that, in the event the investigation hereby authorized and
instituted, discloses the involvement of any other Department, Office, or Agency of the City, the Common Council may amend this Resolution, and the agreement authorized hereunder, to include any such Department, Office, or Agency in the scope of such investigation.

The mayor, who was chairing the meeting asked if there was any discussion, and hearing none, he called for a vote, which unanimously passed the resolution to investigate the mayor.

A Parking Lot For Wesleyan and the Village District
(Full disclosure, two residents spoke on this topic, both opposed the construction of a parking lot on Williams Street where the demolition of the former Forest City Cleaners is planned.  I was one of those who opposed the resolution.  The other was Stephen Devoto, an author on this site, a Wesleyan professor, and Chairman of the Planning and Zoning Commission.  Devoto made it clear that he was commenting as a resident, and not as a representative of the P&Z.  He also made it clear that as an employee of Wesleyan he always recuses himself when a decision involving Wesleyan comes before the P&Z).

A resolution was being considered by the Common Council to accept the property on Williams Street where the abandoned Forest City Cleaners stands, and to lease the property to Wesleyan University for ten years in the expectation that the property would be converted to a parking lot.

He noted that past parking studies have determined that Wesleyan University already has 25% more parking than it actually uses, and that another parking lot, in a neighborhood rife with parking lots, was not needed.  He also noted that Wesleyan has declared the intention to make Williams Street a "gateway" between downtown Middletown and the campus, and that a parking lot was actually an impediment to the gateway status.

Finally, he explained that the cost of the parking spaces would be extraordinarily high given the estimate of $200,000 - $500,000 for remediation of the former dry cleaners.  For a parking lot that will provide 10-12 spaces, a single parking space could cost as much as $50,000 a space.  He also said that by taking the property off the tax roles, the city would be losing yearly revenue because Wesleyan is a non-profit institution.

I also spoke against the development urging Council members to preserve the integrity of the zoning regulations for the Village District.

When the resolution hit the floor, it was clear that the deal was done before the debate began.  Council members worked diligently to explain why the parking lot was the only possible solution that could be considered.

By taking ownership of the property, and leasing it, but not selling it, the City of Middletown becomes eligible for a $200,000 grant to study the remediation needs of the site.  In addition, when the city takes ownership of the site, the liability for off-site contamination is limited, meaning that there would be no opportunity for a downhill property owner to sue the city if contamination is discovered on their property.

In addition, Wesleyan University has promised to pay for demolition and remediation of the building and grounds at the estimated cost of $200,000 - $500,000.

"We don't want to roll the dice on potentially losing that grant," Council member Gerry Daley explained.  "With the proposed lease, and Wesleyan's involvement in the demolition of the building there would be a significant financial impact to the city if we were to demolish it."

"Everyone want to park as close as they can to the place they work," explained deputy mayor Bob Santangelo in defending the need for more campus parking.

"My family owned a dry cleaning plant in Middletown and I worked there," Nocera said.  "I predict the offsite contamination is worse than people understand.  It's a health risk to our community."

The site has been abandoned for years and there has been no previous attempt to remediate the site.

In the end, the Council voted to accept the property from the former owner, accept the grant from the state of Connecticut and allow the mayor to negotiate a ten-year lease with Wesleyan for the property.

After the meeting Devoto indicated that Wesleyan would likely have to bring plans for demolition and construction of a parking lot to the Planning and Zoning Commission because it would need a variance, since the use does not comply with zoning regulations.

It was a resolution that shouldn't have been on the agenda.  The resolution called for the funding for upfront planning on the proposed new middle school.

However, because the state has not yet issued a certificate stating that it will be providing 56% in matching grants for the new school, the council and the bond commission are not allowed to initiate funding without obliging the city for the full cost.

Council member Tom Serra, the sponsor of the resolution, explained that instead of pulling the resolution until such time as the state confirms its promise for matching grants, he decided to keep the resolution on the agenda so he could explain to the public how strongly the Council supports education in Middletown.

With the resolution on the agenda, the Council was forced to vote it down in order to avoid a situation in which the city was obliged to spend the $4 million without hopes of state reimbursement.

This resolution was one of two which seemed to lack appropriate vetting before the agenda was published.  The other, a resolution to form a Green Street Community Center Task Force, sparked more than an hour-long debate about whether such a task force could be formed, who would create the task force, and whether it should be formed by resolution or ordinance.
Posted by Middletown Eye (Ed McKeon) at 11:15 AM

Among the many things wrong with another parking lot is Mr. Nocera's prediction that "offsite contamination is worse than people understand." Remediation will only address on-site contamination. The city is not remediating the existing health risk, only their liability for it.

"Unusual" doesn't begin to describe a resolution passing with no comment by any council member. They must have been suffering from councilmansplation withdrawal. Luckily they had an opportunity to talk ad nauseam about two resolutions that shouldn't even have been on the agenda.

A parking lot in that space - what a waste!