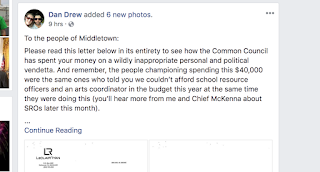 I say let the people vote on all decisions and take all power from this terrible leadership we have. Investigations seem necessary to me given the accusations. So much this mayor does raises many questions. Just read the recent publication on the eye about the pz&d proposal. Maybe Christmas will come early and Danny will resign... Here's to hoping.

The crux of Mayor Drew's letter is this paragraph:
"This investigation was launched and conducted this way because I won’t engage in the patronage that some people have come to expect as their birthright. This abuse of power is symptomatic of the approach to government that has existed in Middletown for too many years and it is one that I’ve pushed back on multiple times in the years I’ve held this office. My standard for hiring is a person’s qualifications rather than connections. And that course of action, from which I have never swayed, has sparked this reaction."
The investigation was launched due to allegations of harassment and discrimination against female employees by Mayor Drew. It had NOTHING to do with all the other concocted matters he sites in his letter. This Mayor attempts to use all means to gain his "followers" trust that he is an innocent bystander at the scene of the accident of which he himself has created.
How Mayor Drew already knows what the independent Counsel asked individual witnesses is concerning. His letter sounds more like a "smoke screen" for the upcoming outcome of the report, rather than a real concern of $40,000 spent on this investigation other than for "the children".
While Mayor Drew writes "my standard for hiring is a person's qualifications rather than connections" is the most moronic statement he has ever made! The proof of this is his hiring of PZ&C Director Joe Samolis. Case closed!

I am 100% inclined to agree with the final statement by Mr. Milardo above. The position of PZ&C director Samolis is proof positive that this "standard" the mayor claims to follow is untenable, and untrue. The machinations that occur behind the scenes here in town are revolting to any person who believes in open and honest government. It is past time for a change, and the various manipulations that have been put into place should be undone in the process. Mr. Samolis should step down, and a qualified person should be hired for this incredibly important position. Many of the departmental consolidations should be reversed, because as we all know, the fox is never much good at guarding the henhouse. (PZ&C Most notably)

Can the Eye please look into accusations that the Council didn't have the legal authority to spend this money? There must be laws on the books that prove or disprove this, right?