A Disquieting Night in the Village 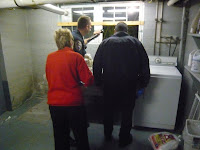 Another Break-in In the Village District

The clock read 1:10 AM, when the first wave of drunken Wes students hit my block of Pearl Street. They were exuberant with the end of classes, the beginning of the "reading" period, the onset of Spring and the availability of cheap beer on Main Street.

I wasn't angry, simply resigned. After a semester of brain-numbing academic work, a little release is essential.

"Reading period," is it? I don't think any of them were discussing Voltaire.

The second wave was a bit noisier, and the only coherent conversation I could make out was a young man who said, "It's because you're a girl," and the young woman he was accompanying said, "Exactly."

By the time a surge hit Broad Street, I was happy that they had decided on a route that didn't take them down Pearl. But I had my light on and I had Dennis Lehane's Darkness Take My Hand open, and was frankly freaked-out by this tale of a serial killer stalking Boston.

I was wired on a dose of decongestant, so I knocked back a hunk of the mystery before my eyes got heavy at around three. On the threshold of sleep, I heard feet scraping down the length of my gravel driveway. The motion sensor spotlight on the backporch clicked on, and I was down the stairway with my heart racing. But whoever set the motion detector off, was gone. I paced from window to window fueled to a buzz by adrenaline.

I sat in the front bay and watched as a huge oppossum ambled across the street. A Jeep Wagoneer circled the block twice. A Wes Public Safety cart passed a young man in hip-hop regalia who was walking down the middle of the street texting and drawing hard on a cigarette. A small grey car pulled into a neighbor's driveway, then backed out, traveled down the street a few hundred yards, and pulled in and out of another neighbor's driveway.

The adrenaline was just easing off when Lucy's cell phone began to ring at 3:45. It was her mother's alarm company. Her burglar alarm on Mansfield Terrace had been tripped, and Lucy's mother wasn't answering her phone.

"You've got to get over there," Lucy insisted. "I put on my sandals, grabbed a sweat shirt, and a length of sawed-off shovel handle and drove the six blocks to the house.

Tiny Mansfield Terrace was lined with six Middletown Police Cars, and an equal number of officers with flashlights blazing. One of the officers had a dog.

When I explained who I was, an officer told me that my mother-in-law was safe in her room, that they were sweeping the house and yard.

"We're trying to pick up a scent with the dog," he told me. "So if you could stay here for a moment, so we won't confuse the dog."

I'm always in favor of not confusing the dog.

Jane emerged from the house, and was invited to sit in one of the squad cars. The officer behind the wheel pulled down the street so she could talk to me. When he got next to me he rolled down the window, hooked a thumb in Jane's direction and asked: "Do you think you'll be able to post bond."

The joke helped crease the tension.

When we went back into the house, the officer took us into the basement and showed us how the burglar used a glass cutter to remove the laundry room window, entered, and when he or she couldn't get into the house (the door at the head of the stairs was bolted), the burglar had exited through a hatchway, which likely set off the alarm.

"It's the third one this evening," the officer said. "Same busted window. Same sneaker prints."

A house had been entered on Liberty Street, and one in a neighborhood closer to the Wesleyan campus.

There are a rash of break-ins, house entries, and burglaries in the neighborhood over the past week or so. Two car break-ins in the Pearl Street, College Street neighborhood. A mobile home entry. A house burglary on College.

The police officers indicated that this kind of crime spree is usually the work of a thief or two, and not necessarily an indication of a wider crime wave.

I sat and read Darkness Take My Hand at Jane's until I nodded off at 5:35. Jane woke me at 6:00 to let me know the sun had risen to make the neighborhood appear safe again.

Lock your doors. Arm your alarms. Leave your porch light on, and call the police (344-3200) if you notice anything suspicious.
Posted by Middletown Eye (Ed McKeon) at 1:59 PM