1970: Long Hair, Tie-Dye, Bellbottoms, And the Dead on Foss Hill 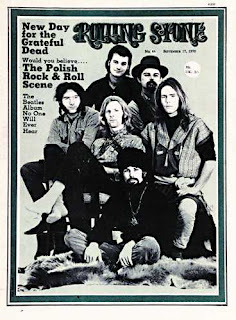 For popular musical archaeologists, an amazing artifact has dropped into the laps of the kids over at the Wesleyan Argus.

A student fundraiser dialing for dollars called an alum, and ended up with an audio link to a Grateful Dead concert held on Foss Hill in 1970.

The music is audible, but just barely, under several interesting conversations recorded in the foreground.

This addendum was found in the New York Times:


I am not a Deadhead nor have I ever claimed to be one. But circumstances were such in the Spring of 1970 that a classmate at Wesleyan and myself soon became caught up in one of the momentous moments in the school's history.

The recent incursion into Cambodia and then Kent St massacre soon after galvanized students across the country. All that and more culminated in The Strike In May, The Dead were playing in the East and, as noted by readers who attended, the Binghampton gig was one of their best.

I was Chairman of Student Events Committee. A classmate told me he was close to The Dead's manager or someone in the band. They were very tuned into what was happening and wanted to do something special. Wesleyan was the right place. "How much will that cost?", I asked, knowing full well our budget had already been blown. "Nothing... They'll place for free!" I thought, why not? This would be a perfect way to go out.

We had a dusk-to-dawn concert planned at the foot of Foss Hill and had lined up some great talent. Plus, our own funky and famous Gamelan players would be playing forever, sort of a sedative, when the high-pitched bands stepped down and in contrast, Wesleyan's world class Indian sitarist-in-residence and his cohorts would be going bonkers on tablas and pakhawaji.

This was going to be our own Woodstock Word about the concert and The Dead coming to Wes never got out until a day or so before the concert. If it had, Wesleyan would have looked like Yasgar's farm. The Dead came and they played and the place was really excited and turned on.

The concert became a paradigm for most of us. Certainly, all the anger, frustration and anxiety over Vietnam had pre-occupied our lives for years seemed to come to a head that May. The tension that had built up in all of us was vented both on stage and in the audience.

More mellow than crazy. It was real '60's. 1970 must have been monumental for The Dead and their fans. Deadheads may claim to have been at or heard the best of The Dead but unless they were at Wesleyan that night on Foss Hill in May, 1970, they haven't been There. And, it didn't cost a dime! — Maurice H., VT

Not that anyone cares, but there's also a Phish file at the Argus site. As for other historically famous Wesleyan shows, I know there's a bootleg of Van Morrison's early 80's show at the hockey rink (with Dave Edmunds and Rockpile opening). And I vaguely remember a very hot Little Feat (with Lowell George) show from the seventies. I'm sure there were many more.
Posted by Middletown Eye (Ed McKeon) at 2:40 PM

It was a great day in great times. Other local events at the time included Black Panther Bobby Seale's trial for murder in nearby New Haven. Many local people were involved in transforming this event which was originally scheduled to be inside, and not for free, into an all day outdoor free fest. We arranged for the Hog Farm with Wavy Gravy to be there, as well as many of Connecticut's top local bands. Good thing, because the Dead who were originally scheduled to go on inb the afternoon, didn't show up unti nearly dark!

The Little Feat show at Wesleyan was on April 4, 1978. It was one of the first concerts I saw, and sadly one of the last Little Feat tours due to the untimely death of Lowell George in 1979.

i was at that little feat show in 78!!. awesome show

I was at the Little Feat show too - it was in the Hockey Rink, a new thing at the time; other concerts I went to in prior years were held in McConaughy dining hall. The sound was boomy but the show was great. (I had the good luck to see them in their "Feats Don't Fail Me Now" heyday around 1975, and I thought that was even better.) Such a great band. I played with Bittersweet at the Spring Fling the night that James Cotton played, 1977, I think.

Too cool ... I, too was at the Wesleyan rink show.

* Opening act, Steven Stills, had the hots for the lady (wearing tight, silver pants ... not that that is 'important' , heh heh) singing with him - plus he had to have been ripped on booze, IMO. His solos never lifted off because "Little Steven" had other things on his little mind (heh).

* Little Feat would take a tune apart, turning it into a soundscape and then - WHAM! - the tune was back like it had never left. Telepathic. I never saw that coming.

* Lowell George's introduction of Richie Hayward (the drummer) ; "He doesn't take a place ... he makes a space"!

Good stuff. 'Rock On' to everyone who was at that show or who wishes that they had had the chance to see this Lowell George version of Little Feat. Good stuff.

was at the show also, sitting on the very top rail last row, It didn't matter, I had never heard any band as tight and together as they were that night, they moved as one, amazing night with the Waiting for Columbus tomato in a hammock as the giant back drop..we need to see more white farmer jeans...

Count me as one attending April 1978 hockey rink concert,Little Feat.I went with a lot of people from a new job I was in.
I remember sitting close up on floor and I believe they let us in with a cooler of beer!Am I crazy?
It was remarkable for many reasons
I quit the job one month later to drive leisurely across country listening to Little Feat and Brian Eno non stop in a VW bus that couldnt go faster than 50mph!.