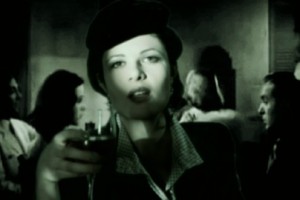 On Saturday, September 22, the Center for the Arts presents "Liebe Love Amour!", an interactive work by Anonymous Ensemble. CFA Intern in Arts Administration Monica Tinyo '13 interviewed Jessica Weinstein, Anonymous Ensemble member and Wesleyan alum (Class of 2002), in this entry from the CFA blog.
Monica Tinyo: I loved the interactive video preview for Liebe Love Amour! Hilda is such an enticing character; you can't help but continue to answer her questions and go through the stream of videos. What was your inspiration for Hilda?


Jessica Weinstein ’02: As with all of my alter-egos, Hilda was born not created. The evolution of Hilda has been going on for at least ten years. Hilda first appeared on stage as the MC for the performance piece, TheBest [Weinstein's first performance with Anonymous Ensemble], in which I walked around the stage on stilts.
I love that anything can happen in live spaces with real bodies [both the audience and artists]. In Wanderlust, another piece by Anonymous Ensemble, we directed the audience through multiple spaces in a massive circus tent. It was a children's show for adults; we called it a "narrative dance party" with live violins and drums. Although it was scripted, it completely involved the audience. Audience members played all the non-speaking roles, which enables the piece to be a distinctly different experience every time; there is a nervous energy when using non-actors that always adds a layer of excitement.
We continue to conceive structures that involve the audience and act as a platform for flexibility and spontaneity. In Liebe Love Amour! we are toying with the idea of how to create a "live film" that also brings in the audience. We combine the most magical aspects of film, the intimate gaze into someone's soul, with the real time and space of the theatre.
MT: How did your company come up with the name Anonymous Ensemble: Intrepid Pioneers of Stage and Screen?
JW: It existed before I came to the company; Eamonn Farrell came up with it. Whatever we were doing was always the "thing" rather than a manifestation or showcase of the company; what was and is important is the present project rather than the "ensemble." Also, the company is always changing; everyone who has been part of the ensemble at some point is and will always be part of the ensemble. The title of the company always made sense with the performances; in my first performance with Anonymous Ensemble (TheBest), there were these renegade, revolutionary tendencies I associated with an underground “ensemble;” it was an epic battle between a group of underground government hackers and pop icons. You could say that the common thread between the projects that are seemingly so different is that there is always searching. In Liebe Love Amour!, the audience goes on a quest for love with the lovely Hilda.
MT: How did your time at Wesleyan shape you as a performance artist and actress?

JW: I was a Theater and English major at Wesleyan. Recently, I keep going back to a class with Ron Jenkins in the Theatre Department in which we researched and recreated documentaries. That class planted the seed of "live film" and an intersection of film and real life.
I am very excited to perform Liebe Love Amour! at my alma mater; Wesleyan should be a great audience for this interactive piece!

"Behind all the frenetic and seemingly spontaneous activity is a very cleverly constructed 'performance script,' with the audience expertly managed to suit the show's needs."
—Circus Sideshow Magazine

Liebe Love Amour! is a theatricalized “live film” of an epic search for love. In this latest work of interactive theater, Anonymous Ensemble creates Hollywood magic using cameras, a green-screen, live video processing software, and the opulent imagery of silent film director Erich von Stroheim. The show unveils a panoply of love affairs between Tall Hilda and a string of paramours including a fictionalized Erich von Stroheim, a devout Gloria Swanson, and the audience in the theater. Throughout the narrative, the audience is drawn into and onto the silver screen as their own stories become part of the fabric of the piece. The show is a tryst between cinema and live performance that invites the audience to voyeuristically participate in the artifice of cinema and the magic of theater simultaneously. With its lush, cinematic orchestration and rapid, real-time editing, Liebe Love Amour! spins layers of romance and reality as it reels towards its inevitable Hollywood finish.
Tickets are available online or by phone (860-685-3355) or in person at the Wesleyan University Box Office in the Usdan Center at 45 Wyllys Avenue.

And for Jessica Weinstein’s blog, click here:
http://www.tallhilda.blogspot.com/
Posted by andychatfield at 4:12 PM