Large Subsidy To Developer To Be Considered By Council Tomorrow

The Common Council will vote at its meeting Tuesday (7PM) on a resolution granting fee waivers and property tax relief to a developer, Waterhouse Development Company, for a proposed luxury apartment project on River Road. The resolution was endorsed by the Economic Development Commission at its August meeting (The Hartford Courant covered the EDC meeting HERE). The proposed subsidy is between $3M and $4M. 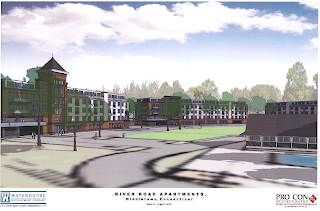 The Economic Development Commission based its endorsement in part on a presentation on the "upscale residential" River Road Apartments from Martin Smith, who is one of the founders of Waterhouse and in charge of land acquisition. According to the draft minutes of EDC, there would be "176-200 units depending on bedroom mix", and the project will cost $36M with a value of $25M in buildings. The developers will also be applying for State and Federal subsidies for environmentally responsible building.

The resolution, if passed, would provide two forms of city subsidy to the Waterhouse Company: an immediate reduction in construction costs of perhaps $500,000, and 7 year tax subsidy of at least $3.2M.

Construction Cost Subsidies.
The resolution would place a cap of $450,000 on the sum of the building permit and water and sewer hook up fees.

The resolution notes that the authority to adjust water and sewer connection fees resides only with the Water Pollution Control Authority (WPCA). WPCA has not yet granted a subsidy to Waterhouse on these connection fees.

Thus, the Council will be voting on whether to provide a substantial subsidy towards construction costs, depending on the calculation of the water and sewer connection fees this portion of the subsidy might be in excess of $600,000.

Tax Subsidy.
The analysis of "Fiscal Impact" provided in the resolution estimates that the apartment complex will have an assessed value of $20M. This would generate $538,000 in property taxes at this year's rate. The resolution calls for the Waterhouse Company to pay reduced taxes for 7 years after the apartment complex receives its certificate of occupancy. In the first 4 years after occupancy, assuming no change in the tax rate or the assessed value, Waterhouse would pay taxes of $22,000, it would rise to $107,600, $161,400, and $215,200 in years 5, 6 and 7.

Benefits To The City
The resolution lists as a benefit to the City only the presence of "high end, luxury housing." It does not include the donation of a very narrow "land strip at the waters edge", which is mentioned in the draft minutes of EDC.

A Commentary On Nomenclature And Numbers
The resolution does not literally call for a "subsidy" to Waterhouse Corporation, it instead authorizes a "property tax fixing/abatement agreement" with Waterhouse.

Every such resolution includes a fiscal analysis (for example, for the ordinance granting property tax relief to senior citizens, the fiscal analysis indicated a $50,000 cost to the City). The analysis for the Waterhouse resolution suggests that it would begin a process that will generate a $2.6M increase in payments to the city over a period of 10 years. This analysis assumes that the current owner of the property, which houses a defunct corrugated products plant, will do nothing with the property for 10 years unless this resolution is passed.

Thus, the fiscal impact of this resolution depends on what would happen in the next 10 years without its passage. If the Waterhouse Corporation (or anybody else) would develop this land as proposed anyways, then if the resolution is voted down it would save the city at least $3.2M. On the other hand, if the land would remain the site of an abandoned cardboard factory without this $3.2M incentive, then if the resolution is voted down the city would forgo $2.6M over the next 10 years.
Posted by Stephen H. Devoto at 6:00 AM

Can someone explain what economic benefits this development will bring to our city?

Urban planners are strongly supportive of higher density, downtown housing for an array of economic and ecological reasons. No open space or former farmland will be used for this reclamation. Downtown will benefit from more customers who can walk to downtown businesses. At the end of the 7-year subsidy, the city will have property tax from the owners.

You need shops, restaurants and other amenities for an upscale tenets that they are talking about. So far we are just talking about apartments. Where is the rest of the development of the riverfront.

P.S. look at the higher density in the North end on Ferry st. Has that made the area better, I would say no. We got sold a bill of goods that the area would improve, and yet that has not happened. Drugs, prostitution and loitering are rampant in the north end.

If the developer is not confident enough to assume the risk of future profitability without taxpayer (i.e., current residents) assistance, why should the taxpayer lend the hand? Developers are in the business of gambling - municipalities have, by their nature, a greater responsibility to be cautious with the taxpayer's money. This may be a great idea (I have my reservations) but it should be the responsibility of the developer to assume the risk.
Another idea worth pursuing might be the development of upper floors along Main St. into luxury apartments. All of the amenities, including river views, might be had and existing underutilized space would be transformed.

incentive based development is key in luring the right kind of money making development- i would rather give a tax break to a for profit business that will eventually go back on the tax rolls then more subsidized housing! middletown is drowning in subsidized housing- course it keeps non profits in business

This would, in fact, be subsidized housing--for the wealthy.