A Long Planning and Zoning Commission Meeting, Part One 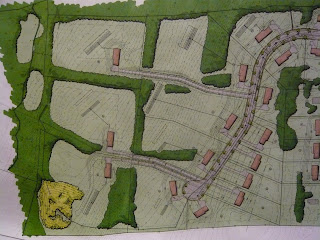 In a bit of tag-team reporting, I attended the first part of a long Planning and Zoning Commission meeting tonight.

While no one expects citizen democracy to run like a well-oiled machine, the meeting began like a machine with several parts missing.

To begin with the commission has been without a chair due to several aborted votes over the past few months. As a result Vice-Chairman Richard Pelletier has been running the meetings.

It's a legal fact, but apparently not a well-known fact, that although an item is on the P&Z agenda, it does not necessarily mean that the public, or the party seeking a decision, can speak on the topic. Some topics require a scheduled, legally-noticed, public hearing. The public hearings are listed on a separate legal notice.

Tonight, there were three legally posted public hearings, and these are usually handled just after the agenda item titled "discussion with public on items on agenda which are not, will be not, or have not been the subject of a public hearing."

That's not the way it happened tonight as the commission began taking testimony on an agenda item which would not officially be heard until much later in the meeting. The commission made an exception for neighbors of a proposed in-home massage business, because these neighbors attended the meeting with young children who would not be able to make it through the entire meeting. However, the single exception for these parents was stretched to hear testimony of a massage client who wanted to get home to watch a UCONN basketball game, and another neighbor who didn't express any exceptional need at all. When the owner of the massage parlor took to the microphone to respond, she was asked to vacate the podium until the item came up in the regular course of the meeting.

The commission approved a 22 lot subdivision on the former Jablonski farm on Higby Road, but only after much testimony from residents who often did not seem clear whether they approved of, or opposed the plans, and from the legal counsel to the property owners. The commission approved the subdivision with two amendments, to modify the sidewalk plan and to provide a warning notification to neighbors if blasting was required in the construction phase of the subdivision.

The board also passed new legal language on floodplain definition which affects upwards of 1000 residents who now find themselves within defined floodplain by FEMA requirements.
Posted by Middletown Eye (Ed McKeon) at 10:26 PM

Giving approval for a massage parlor in a residential area... another example of the lovely P & Z crew in Middletown.

Why do we even have meetings?

99% of what is proposed is approved without questioning.