Pedestrian injured in Hit and Run 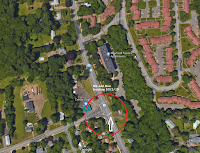 Submitted by MPD.
---------
The Middletown Police Department responded to a motor vehicle accident on October 2, 2019 around 4:30pm. The accident occurred at the intersection of Newfield Street and Westfield Street.

A 50 year old man was crossing Newfield Street with the cross walk signal when a dirt bike traveling southbound at a high rate of speed on Newfield Street passed all stopped southbound traffic and went through the red light. The dirt bike then struck the pedestrian in the cross walk sending him flying 15 feet. The pedestrian suffered a broken leg as well as other bumps and bruises from being hit by the dirt bike. The drive of the dirt bike did not stop and fled the area.

The Middletown Police Department is looking for the public’s help in identifying the operator of the dirt bike. The operator is described as a white male wearing a white helmet. Anyone with any further information is urged to contact Officer John Passacantando at 860-638-4063 or 860-638-4000.
Posted by Reader Submitted at 11:34 AM