Opinion: Giuliano Not Responsible For Paid Vendor's Work On His Behalf

Submitted by Delice  Ferrara
----------------
It  is  most  disheartening  when  a  campaign  for  public  office  resorts  to  accusations  of  alleged petty  wrongdoing.  For  example,  an  individual  who happens  to  be  designing  and  supplying campaign  materials  for  Seb  Giuliano,  queried,  on  the  Middletown  Eye,  as  a  private  citizen,  a question  about  a  Florsheim  campaign  worker.  It  appears  that  the  question  asked  was  based  on a  case  of  mistaken  identity  and  did  not  pertain  to  the  individual  working  for  Florsheim. Immediately  after  this  Facebook  comment  was  posted,  however,  the  Florsheim  campaign, without  proof,  accused  the  Giuliano  campaign  of  orchestrating  an  effort  to  defame  a  political opponent.

Regardless  of  whether  the  individual  who  posted  the  comment  volunteered  or  acted  as  a vendor  for  the  Giuliano  campaign,  they  are  also  a  private  citizen  who  has  the  freedom  of speech  to  post  whatever  they  want  on social  media  at  their  own  discretion.  In  no  way  does  this prove  that  this  was  done  at  the  behest  of  the  Giuliano  campaign,  in  reality,  it  is  just  another accusation  with  no  evidence  designed  to  defame  an  individual,  in  this  case,  Mr.  Giuliano. Stretching  the  facts  to  fit  a  political  narrative  moves  us  down  a  dangerous  path  where  we  will accomplish  nothing  except  for  eroding  the  trust  of  the  voting  public. 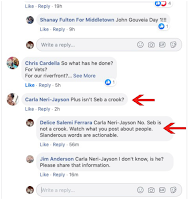