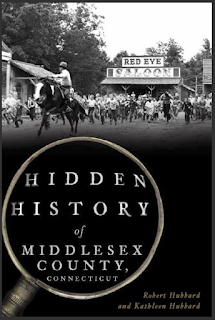 City authors Robert and Kathleen Hubbard will present some of the little-known history of our county on Thursday at the bookstore. The Hubbards have authored the recently published "Hidden History of Middlesex County, Connecticut.

Robert Hubbard is a retired professor at Albertus Magnus College in New Haven, Connecticut. Kathleen Hubbard is a retired teacher from the Middletown, Connecticut public school system. Both were born in Middletown, and each has lived in Middlesex County for thirty years. They are the authors of Images of America: Middletown and Legendary Locals of Middletown. In addition, Robert is the author of Armchair Reader: The Last Survivors, Images of America: Glastonbury, Connecticut's Deadliest Tornadoes and Major General Israel Putnam: Hero of the American Revolution.
Posted by Stephen H. Devoto at 12:00 AM