As an organization which has held its annual meetings at Eli Cannon's, it's with regret and joy that the Middletown Eye shares Phil Oulette's announcement that Eli Cannon's has been sold to long time employees Rocco and Aubrey Lamonica.

Phil is unlikely to acknowledge his essential role in the revitalization of the North End of Main Street in Middletown, as he and his restaurant became known as early champions of the craft beer culture.  He coined the term NORA, for the neighborhood (North of Rapallo), and was a huge factor in the opening of NORA cupcakes, and cross-the-street rivals, Krust.

Phil is also unlikely to brag about all he's done for the neighborhood, donating generously to Macdonough Elementary school, Gilead Community Services, Films On Foss and other organizations, and for being a champion of downtown Middletown business.  We'll all miss Phil, who likes to pretend he's a hardass, but he really has a heart of gold.  And for anyone who has had a glass of amazing beer on the beach, and is worried about the next, the joint is in good hands. 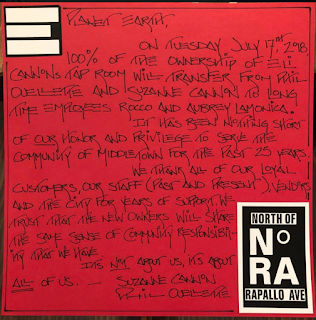 Posted by Middletown Eye (Ed McKeon) at 8:10 AM

Phil has done a lot for the community, and I look forward to the next phase of Eli Cannon's historic story under the new stewards. Thanks for posting this.