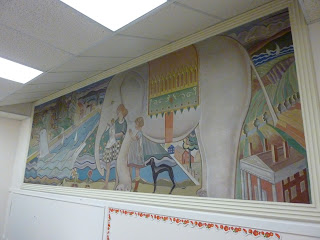 One of the most unexpectedly pleasant mornings I've ever spent in Middletown happened as I went to take a few "routine" pictures of the St. Sebastian School property open house.

Inside, I heard someone talking about "the mural," and when I followed someone into a classroom which had been subdivided into two smaller rooms, I turned the corner and saw it.

(The kindergarten mural by Albert McCutcheon at the St. Sebastian School.) 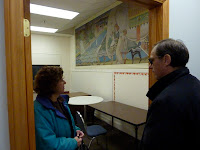 "There it is," said Deborah Shapiro, director of the Middlesex Historical Society.  "It was painted by Albert McCutcheon in 1936 as part of the WPA (Works Projects Administration)"

I had never heard of McCutcheon, but I was about to learn a great deal more in just a few hours.

The large mural, painted directly on the wall plaster, is designed to be appealing to the kindergarten class who occupied the room when it was the Durant School, a public school which was sold to St. Sebastian's to use as a school.  The church is now hoping to sell it back to the city of Middletown to use as a Senior Center.  As such, it is colorful representation of life in Middletown, with local buildings, the Connecticut river, a true bird's-eye view, and, of course, an elephant.

(Janet McCutcheon Batt in front of the mural.)

As I was photographing the outside of the school a woman approached.  She told me she was at the open house to see the mural.  I followed her into the room.

"Oh my god, they split the room in half," she said.  And then looking up at the mural.  "The colors.  Look at the colors, they've held up so well."

This was Janet McCutcheon Batt, daughter of the artist.  It was the first time she had seen the mural in years.

Seeing the mural began a flood of reminiscence as McCutcheon Batt recalled being invited into the kindergarten class as a friend of her cousin who was a student at Durant "I was at Farm Hill," she said.

"They were very discriminatory," Batt remembered.  "I was treated well until it was time for a snack, and everyone got one but me."

Childhood bitterness aside, Batt recalled that this mural was her father's first WPA commission, and that he had several others, including a double-panel mural that was created for what was then the Woodrow Wilson High School.

(Batt and her niece Margaret Faber and Faber's son William.)

As we spoke, Batt's niece, Margaret McCuthcheon Faber arrived with her young son William.  It was the first time seeing the mural in person for Faber and her son.

"We have a black and white print at home," Batt said of a WPA-era photo copy of the mural.  "But it doesn't compare."

Batt was quick to point out that she was the model for the youngest girl pictured in the mural, and that the older girl is her sister Viola McCutcheon Lyman, who is a respected artist herself, and now living in Maine.

Batt told me that her father grew up in a small house around the corner from the school, and that at that time, the landscape was quite different than it is now. 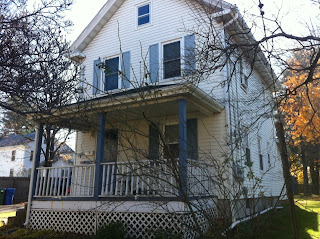 (The McCutcheon homestead on Durant St.)

"They kept horses," Batt said.  "The house was surrounded by pastures."

Batt told me that Albert had five brothers, one of who became a concert pianist, one a noted insurance man locally.

(A self-portratit by Albert McCutcheon.)

Albert studied at the Yale School of Fine Arts, and in 1923 continued his studies at the Julien Academy in Paris, where he met his wife, Englishwoman Milder Anderson, also an accomplished painter who had been raised on a tea plantation in Sri Lanka.  McCutcheon returned to study in Europe several times over the next decade, but he and Anderson settled back home in Middletown, building a home on Marguerite Road, and a studio constructed from materials salvaged from a house that stood at what is now the junction of Crescent Street and Main Street Extension.

As a WPA artist he painted the two murals mentioned above, as well as 15 easel paintings for public institutions around the state.

I went with Batt and Faber to the old Woodrow Wilson High School on Hunting Hill Road to see if we could get in to view the mural, representing the history of Middletown, there.  It had been taken from the room where it was hung, and relegated to a third floor hallway.  We managed to talk our way in, and found the mural, barely visible against a dimly lit wall across from apartment doorways.

Batt invited me back to her fathers home, which she returned to after her parents died, to see the studio where the works were created.  The home is on a hill, in one of those corners of Middletown where a downtown resident like myself looks around to marvel that I'm still in the same city.

The house is filled with the canvases of McCutcheon and his wife Anderson, and the pottery of Batt, who has obviously inherited some of the aesthetic instinct of her father.  Batt allowed me to see the modello for the mural that hangs at Woodrow Wilson. 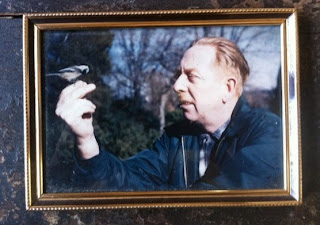 According to Shapiro, the Mattatuck Museum in Waterbury is conducting a survey of all art created by WPA artists in Connecticut.  She was seeking assurances from the real estate agents, and from the representatives of the city who attended the open house at St. Sebastian School that the mural by McCutcheon, which has survived for nearly eight decades, will be preserved if the city purchases the school for a senior center.  The mayor, and the Common Council members she spoke with assured her that the mural is a hidden treasure that the city would preserve.
Posted by Middletown Eye (Ed McKeon) at 12:21 AM

Amazing! I like that American Regionalist style, and this is a pretty charming example. I hope (but doubt) that the city puts it in Russel Library or somewhere similarly visible instead of sticking it in some dark corner like the Wilson one.

The city should get the Wilson one back from the people that own Woodrow Wilson apartments and hang it in the new Senior Center at the St Seb school. Would be amazing to have both works togather and permanently preserved, in that great old historic building and restore the cuppola, the old fireplace and the hardwood floors while your at it.

The city tore down the old city hall and sold Woodrow Wison, but this could be a great example of the city buying something and restoring it back to its historic charm.

Finally the city is doing something smart. Don't miss the chance Council .

Wonderful story ! Is this McCutcheon family related to the family the park is named for? Ron McCutcheon Park / Crystal Lake ? I wonder what the story is there?

What is the white elephant in the mural mean?

Yes! Albert and Ronald were brothers. (My mother, the Janet McCutcheon Batt in this story, isn't online, so she couldn't answer the question.)

In reply to an earlier comment/question, Albert McCutcheon (my grandfather)was the brother of Ron McCutcheon, pianist, swim teacher, and lifeguard for whom the park at Crystal Lake is named. Ron was the grandfather of Margaret McCutcheon Faber (see original post). The other four brothers were Ernest, Harry, Frank, and Elden.