The Planning and Zoning Commission voted to elect Richard Pelletier Vice-Chair, and later in the meeting appeared to violate State Statutes in approving a plan prior to its review by Inland Wetlands. Don Guire, represented by George Smilas, came before the Commission to apply for a change in a special exception permit. Guire would like to modify his plans for the Autumn Meadows active adult community located off of Saybrook Road; his revision would replace a duplex and a triplex that were in the previously approved plans, with 5 separate detached homes. He told the Commission that market pressures dictated this change, "My customers don't want attached units."

Michiel Wackers pointed out to the Commission that two of the homes were in the Inland Wetlands review area, and since the original plan required Inland Wetlands approval, the revised plan should also be evaluated by the Agency. Guire objected to the delay that an Inland Wetlands review would cause, saying it might cost him a sale of one of the properties, "I just don't see the need to go back to Wetlands."

The Commission was sympathetic to the harsh economic situation in which Guire is trying to sell homes. They agreed to rush the application through, and approved the revised plans, subject to the condition that Guire submit the revision to Inland Wetlands for its approval.

This approval appears to have violated a state statute which requires that developers gain approval from Inland Wetlands BEFORE seeking approval from Planning and Zoning. Chapter 124, section 8-3 states that if wetlands review is involved,

Neither Wackers nor any of the Commissioners raised any concerns about this State Statute. Commissioners Bolz, Fazzino, and Pelletier each explicitly endorsed P&Z approval prior to Inland Wetlands review, and the conditional approval was unanimously granted.

Pelletier Elected Vice-Chair
The Commission had deadlocked at the last meeting, over the election of vice-chair with the Republicans contending that the Chair and Vice-chair positions should go to members of the opposing parties. As no party can hold more than 4 seats, a modicum of bipartisanship is required for the 5 votes necessary to pass anything. 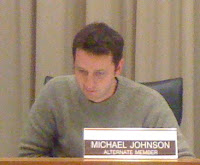 As soon as the Pledge of Allegiance had been recited, Johnson introduced a resolution to rearrange the agenda so that the election of officers would take place immediately. Fazzino said that two Republicans (Catherine Johnson and Ken McClellan) had stated that they would be late coming to the meeting, and objected to the rearranging of the agenda, "I would like to request that we wait until they arrive."

After the meeting I asked Michael Johnson about his motion and subsequent nomination of Pelletier. He said that moving the election to the beginning of the meeting was not motivated by a political calculation, he said that he wanted to "Get it out of the way," so that the commission could focus on its real business. Johnson similarly said that his nomination of Pelletier was not based on any party affiliation, he said it was a "Judgment of qualifications." He felt that of all the possible candidates for vice-chair, Pelletier had the best "ability to respond with P&Z matters on a consistent basis."
Posted by Stephen H. Devoto at 12:01 AM

The vote for VP was purely political and if you believe Alternate commissioner Michael Johnson's explanation that it was (amended) moved to the front of the agenda so other commission affairs can get done quicker than I have the Portland I can bridge I can sell you.
" quicker, we are slow"
We were the suppose to wait for Mayor Giuliano who was scheduled to be there at 8pm to speak of the river front.So we had time to kill.
First of all the election of officers was not even on the agenda.
The agenda tells the public whats up front to be discussed so the public can comment on it. For that reason items should not be added to the agenda.
It was not only unfair to the minority Republicans but also not fair to the public.
This was done so they could vote Richard Pelletier to VP with no opposition.
This was a political plot by the democrats.
I hope that the citizens of Middletown will remember this when it's time to vote in 2011.
Also I believe that you need a super majority to amend the agenda.
So Richard Pellietier may still not be VP. I am looking into it and will follow up on this.

To follow up on the super majoity vote I was informed that the Democats did their homework. There were 2 things needed. Enough to quorom and 2/3 mojoruty vote. They had both.They had enough for a quorum with myself sitting in (a mistake on my part)and with the Democrats all voting yea and myself the only no vote they had 2/3 majority vote.
The old saying majority rules.

The developer sought to modify the approval, which placed 2 homes slightly closer (between 5 and 9 feet) to the wetlands than originally approved. The statute quoted pertains to site plan applications for new permits. This was in no way a new application for site plan approval. Simply a modification to the approved.

I have discussed the matter with the City Attorney and there is absolutely no violation of state statute.

Additionally, the Commission recognized the change to the wetlands permit and approved the modification with the condition that the matter be brought to the Inland Wetlands Agency for a review prior to the approval of a building permit (which authorizes actual construction).

Commissioner Nick Fazzino... The Democrats won the last election for P&Z, yet you somehow feel that the Republicans should control 3/4 leadership seats on P&Z... why?

It looks like someone has contempt for the will of the voters. You've managed to impress those of us who bother to watch your antics on public access with your remarkable and feckless partisanship.

Bill, thank you for your input. I accept your statement that what happened was not illegal, I certainly did not consult an attorney before writing this article. However, I maintain that P&Z approval, even if conditional, was wrong.

I am not sure I follow your logic ("this project has had a valid Inland Wetlands permit and Planning and Zoning approval since 2007"). After all, it has also has had a valid P&Z permit since 2007. But those are not permits for the modified site plan now being proposed, your office quite wisely pointed out that neither permit is valid. I am not sure why the order would matter for the original permit if it does not matter for the modification.

This is not fair to the developer.