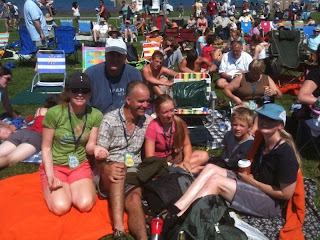 I knew my fellow Eye author Stephen Devoto would be attending the Newport Folk Festival (legally, Folk Festival 50) this weekend with his family. What I didn't expect was to coincidentally park my blanket so close to theirs. I was scoping out a few square feet of lawn when I heard my name, and saw Stephen and his family already staked out a few blanket spaces away.

The event was incredible. The 50th anniversary of the festival, revived on death's doorstep by original founder George Wein, and the 90th birthday year for Pete Seeger, who closed out the evening with an old-fashioned sing along.

Wein, and his revived company, New Festival Productions, programmed Saturday's event to appeal to old stalwarts like me, and to young fans who were likely attending the festival for the first time. My estimate that at least 60% of the audience was under the age of 30. And why not, with young bands like the Avett Brothers, Langhorne Slim, the Fleet Foxes, the Decemberists and Brett Dennen.

My favorite sets were by Gillian Welch and David Rawlings, who, because of a late flight from Los Angeles, were escorted to Fort Adams by a police escort. Welch had the sound man pump up the reverb and fed her distorted sense of time and place (she claimed not to have slept for 36 hours), with a psychedlic acoustic version of White Rabbit that would have made Grace Slick proud and happy. Billy Bragg peformed three Woody Guthrie tunes, and a handful of his protest numbers, and mostly avoided his love songs to earn some political cred with the sympatico audience. And Rhode Island's newest wonders, the Low Anthem, amazed with a set of mostly quiet, atmospheric numbers on a rotating set of instruments accompanying hushed harmonies.

The biggest mystery to me was Iron and Wine (aka Sam Beam). After reading glowing reviews, and puzzling over his recorded ouevre, I was anxious to see and hear Iron and Wine live. Beam drew a huge crowd to the Harborside Tent, but I was underwhelmed by his stage presecence, his voice, his guitar work and his songs. Yet I was alone, because the adoring throng was singing along with every word.

Devoto, who claimed that Ramblin Jack Elliot was his favorite act Saturday, planned to attend today's show with his family, which featured more of the same kind of mix of old favorites, and new talent.

AWESOME! I love NFF. Thanks for the coverage since we missed it this year.

Next weekend is the Newport Jazz Fest...always the weekend after the Folk Fest.