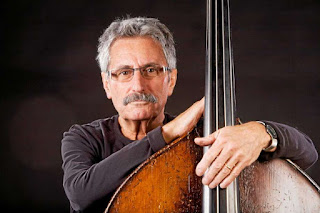 I've been listening to, talking to, watching, and enjoying the music of Mario Pavone for over four decades.  His percussive yet melodic bass playing both anchored and freed up the music of the Thomas Chapin Trio. Before his 18 year run in the late saxophonist's ensemble (1980-97), he worked with pianist Paul Bley and trumpeter/ conceptualist Bill Dixon. Pavone has also led or co-led groups with Wadada Leo Smith, pianist Peter Madsen, guitarist Michael Musillami, and saxophonist Marty Ehrlich - his bands have featured drummer Michael Sarin, trumpeter Steven Bernstein, pianist Craig Taborn, and drummer Matt Wilson (among many others).  I have always admired how Pavone builds his music up from the rhythm section, his muscular playing and elongated melodies giving the musicians so much to work with. 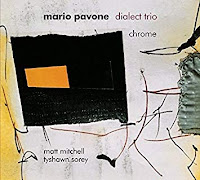 Mr. Pavone, who turns 78 in November, remains active throughout the United States and Europe.  His latest album, "Chrome" (Playscape Recordings) features the Dialect Trio of pianist Matt Mitchell and drummer/Wesleyan Professor Tyshawn Sorey - they did a short tour around the release of the new album in May. The songs on the album are all originals, nine of the 10 composed solely by the bassist and one group improvisation.  As he has done in the past, Pavone reimagines pieces he wrote for larger ensembles to fit the dynamics, style, and creativity of his musical partners.  Not only did he produce the album (recorded at Firehouse 12 in New Haven) but also contributed the cover art.

The bassist is coming to The Buttonwood Tree, 605 Main Street in Middletown, on Saturday June 30.  He'll have his partner from the Chapin Trio, Michael Sarin, at the drum kit and a relative newcomer to his groups, pianist Angelica Sanchez, one of the finest interpreters of creative contemporary music.  They'll perform music from the new album as well as pieces from previous Trio albums.

For more information, go to buttonwood.org/event/dialect-trio-feat-mario-pavone/.

Here's an older piece by the Pavone-Mitchell-Sorey trio:

We apologize to any who came out to the Mario Pavone show on Saturday. Unfortunately, the air conditioning is out in the building and the show needed to be postponed. News did not get out in time for some to be notified and we do apologize for that. No new date has been set.