Danny Green 3 at The Buttonwood

The Buttonwood Tree, 605 Main Street in Middletown, presents the Danny Green Trio in concert at 8 p.m.  The Trio - Green (piano, compositions), Justin Grinnell (bass), and Julien Cantelm (drums) - began their musical journey together in 2010 (the association of Grinnell and Green started three years before that) and has released four albums together. The Trio was signed to OA2 Records in 2014 and, with the recent arrival of "One Day It Will", now have issued three CDs on the Seattle-based label. 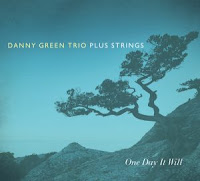 The new album is what brings the San Diego, CA resident and his band to the East Coast.  The recording features a string quartet, an idea that Green brought to his previous album for three songs. The reception was so positive that the composer and arranger created a full program for the his band and the strings. And, this is not just a piano trio with strings for sweetening.  Green has created melodies especially for the two violins, viola, and cello in which the Trio supports, interacts, and creates new harmonic possibilities.  Also, Green's music has moved away from the strong Brazilian influence that one could hear on the first two recordings.  Now, one can hear hints of Chick Corea, Keith Jarrett, Bill Evans - nothing overt, mind you but truly a sign of growth, maturity, and curiosity.

The Buttonwood date is one of several on this East Cast swing without the strings. Nevertheless, the music should be listened to for the melodic content and the intuitive interactions of the rhythm section.  What is great about the performance space is that you can really pay how the Trio creates its sounds, the communication taking place, and how they respond to the audience.

Danny Green is conducting a Master Class at 6:30 p.m. (with a separate admission charge).  The Danny Green Trio takes the stage at 8 p.m.  For tickets and more information, go to buttonwood.org/event/the-danny-green-trio/ or call 860-347-4957.

To learn more about the pianist, the Trio, and the music, go to dannygreen.net.

Here's an engaging piece from the new album:

(A slightly different version of this post appeared on steptempest.blogspot.com).
Posted by Richard B. Kamins at 1:08 PM