"A Society Should Not Be The Agent of Death" 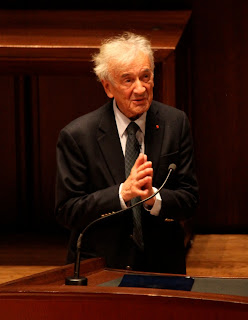 Michael Roth, President of Wesleyan, introduced Elie Wiesel to a rapt audience of 600 students, faculty, alumni, and community members on Tuesday evening in the Wesleyan Chapel. Speaking of Wiesel's life work against war, genocide, and hatred, Roth said, "He goes on telling the story, he goes on teaching, he goes on writing. Because he sees the work is not yet accomplished."
Wiesel is a Romanian born Jew who at the age of 15 was sent to the Auschwitz concentration camp; his mother, father, and sister were murdered by the Nazis. Wiesel has spent his life since then as a journalist, educator, and prolific writer of fiction and non-fiction books. Wiesel is currently a professor of Humanities at Boston University.
In an interview prior to his address, Wiesel said that until 3 days ago he had been planning to speak on the more general topic of "Building an Ethical Society". He said that when he learned about the brutal murders in Cheshire, and the current sentencing phase of the trial of one of the men, he decided to speak about capital punishment as well.
While calling for the establishment of an ethical society and the abolishment of the death penalty, Wiesel acknowledged he could inadequately address the husband and father whose wife and daughters were murdered. In the interview, he said, "It would be almost obscene to plead [with the survivor] for morality." He said he could only ask, "Do you really think that capital punishment would bring her back to life?"
Wiesel wove a story of history, of himself, and of his vision for a moral society in a speech that enraptured the audience with wisdom and wit. The story telling and the wit are difficult to convey on the computer screen, but here are some of his comments.
One of the first stories of the Old Testament is about the murder of Abel by his brother Cain.
Why?
In the original, the Lord addresses Cain after his killing and says, 'The voice of thy brother's bloods crieth out.'
Wiesel's interpretation: "Whoever kills, kills his brother. Whoever kills, kills not only the person but also the children that person would have had."
"It is the law which makes a society a moral or immoral society."
"Law should celebrate life."
"Death should never be the answer, not in a moral and civilized society." 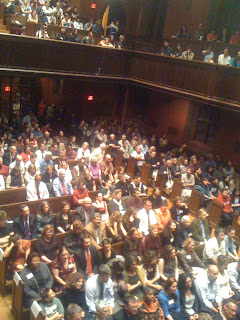 Thank you Stephen for covering this most important talk.

I wonder what his thoughts are on abortion???

In this day and age, you need not just wonder, you can look things up on the web. I googled Elie Wiesel abortion, and quickly found a Chautaqua talk he gave on What Makes Us Moral, where there was a question at the end on his views on abortion. He gave a very succinct answer: "no comment."

One can read many things into that answer. My personal reading is that he might not want everything else he said so thoughtfully about morality in the previous hour to be drowned out by the shrill voices about this one topic. But that is just my reading of it.