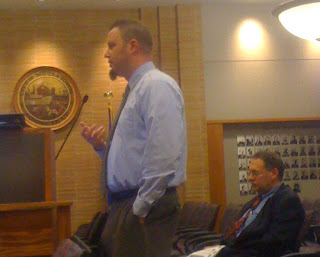 When Catherine Johnson heard a presentation of a Downtown Housing Market Study at Wednesday's meeting of the Design Review and Preservation Board, she suggested that the Planning and Zoning Commission also hear the presentation. Chairman Quentin Phipps agreed to waive the rules, and P&Z heard a condensed presentation about the challenges Middletown faces in trying to increase the number of people living downtown.
The report was presented by Darren Mochrie and Fred Pulitzer of the Economic Planning Real Estate Consultant group RKG Associates. Mochrie said that with current economic and housing conditions, it would be difficult for Middletown to increase the amount of housing downtown, both because there is insufficient demand and because there is too much supply, "The city has some very challenging market supply indicators but also some demand indicators."
The executive summary of the report concludes:

In summary, the potential for housing in the downtown over the near term is relatively small, due primarily [to] the shifting demographic base and poor economic time. Middletown (community-wide) also has a large and diversified supply of housing at multiple price points. The median value of single family homes did not experience the rapid annual appreciateion as was evident in the case study communities, and as such upscale housing does not seem warranted in the downtown, at least at this point, unless some major external event occurs that would stimulate demand

Mochrie suggested that other than general economic factors, the factors which could most impact downtown housing would be the availability of off-street parking and green/open space.
Commissioner Michael Johnson asked whether a mixed use neighborhood downtown would be attractive to potential residents. Pulitzer responded that this has been successful in communities which have light rail for commuting, the train station appears to foster mixed use neighborhoods.
Michiel Wackers, Deputy Director in the City Planning Office, told the Commissioners that the City was hiring an architect to look at the challenges and opportunities for developing a couple of sites downtown, and that there would be other presentations this fall on downtown planning. 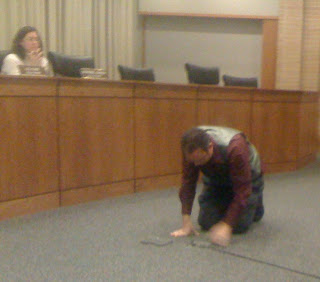 When the microphone was malfunctioning during the meeting, the wire jiggling wizardry of Jon Pulino restored function.

Another hard working Republican on his knees wiggling something

This article supports the concept of downtown planning that considers many features and values (housing, parking, open space, transportation, bicycles, walkers, river access, retail, aesthetics, etc) as a coherent whole, rather than dealing with these elements in isolation. As a community, we need to approach the downtown parking garage project, Harbor Park, Melilli Plaza, and others in this way, working together with a long term vision. The Jonah Center will be offering such an opportunity at our community forum next Tues. Oct 19, at 7 p.m. at First Church. The event is called "Rivers, Trees, Bikes, Boats, and Energy."

While I concede that Middletown should continue to plan and execute strategic improvements to downtown, I fear Main St., and the North End are the only areas of the city that get this kind of attention and resources.

I may just not have enough information, but I rarely hear of projects to improve the south or west sections of the city; its always downtown and North End.

Our city is larger and than just these small areas.

If you changed "Republican" to "Democrat" it wouldn't have made the post.

The real Man of the town said...

This is the real Man of the town....
Mr. Pulino was reconnecting the cable due to the equipment being garbage. If the city would replace it this would not be an issue.

Bring in the Showmobile!

I have to admit I can't believe all these comments about a cable- LOL. I appreciate Stephen's sense of humor last night at Planning and Zoning last night.