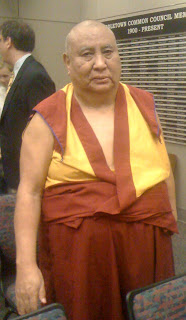 The Venerable Lobsang Tenzin Rinpoche appeared at Wednesday's Planning and Zoning Commission, in support of an application to convert a single family dwelling at the intersection of Park Place and Washington Street into a residence and place of worship.
The applicant was Ted Zervas, Director of the Chenrezig Tibetan Buddhist Center, currently located on the second floor of a Main Street walk-up building. Zervas spoke about Rinpoche with awe, emphasizing his stature as a teacher and spiritual guide in Tibetan Buddhism, "He is the highest academic in his tradition ... He's the number one monk." He said that it was remarkable to have him here in Middletown.
Attorney Michael Dowley, representing the Buddhist Center, said that the 76 year old Rinpoche was having difficulty negotiating the narrow stairs at the Center's current location on Main Street, and the house on Park Place would allow him to continue his teaching. The Lutheran Church on Washington Street will allow worshippers at the Buddhist Center to park in their large lot.
The Commissioners approved the application unanimously.
Hardware Stores and Self-Storage
In other business, the Commission approved a zoning code text amendment to allow hybrid businesses in the "General Business Zones", which are found along the major roads into the city (portions of South Main Street, Saybrook Road, and Washington Street):

Retail Sales and Self Storage. Retail sales and self storage in commercial buildings where the currently existing space, used for hardware stores, paint shops, other building supplies and similar business uses, may use up to fifty percent (50%) of the space of the building, which shall be separately partitioned, for self storage purposes.

The applicant for this zoning code text change was Andy Grant, owner of the Ace Hardware on South Main Street; he was also represented by Attorney Dowley. Grant told the commissioners that the arrival of Home Depot in Middletown had changed the nature of Ace Hardware, and he no longer carried the kitchen counters and other large items that he formerly did. He said that his building, constructed for a Grand Union supermarket in 1960, was twice as big as he could now use for the hardware store business.
Dowley said that the Middletown Chamber of Commerce strongly supported the text change. Grant said that using the rear half of the building for a self-storage business would "give us the breathing space to pay our bills."
Approval by the Commissioners was unanimous.
Posted by Stephen H. Devoto at 5:01 AM