The Planning and Zoning Commissioners continued their battle over election of officers last night. The Democrats normally have a 4 to 3 majority, but with Commissioner Barbara Plum again absent for the winter months, and the Republican alternate, Ken McClellan, seated, there were 4 Republicans and 3 Democrats voting. The Democrats entered the meeting with a plan for sharing power with the Republicans. This plan was that Democrats would hold both the Chair and the Vice-chair position, while Republicans would hold the Secretary position and the representative to MidState Regional Planning.
The Republicans did not agree. When vice-chair Richard Pelletier (D) called for the vote on Chair, it went strictly according to party lines, Les Adams (R) getting 4 votes and Quentin Phipps (D) getting 3 votes. Dan Russo (D) then quickly nominated Les Adams (R) for Secretary, apparently catching the Republicans off guard. Adams was elected by a unanimous vote. Catherine Johnson (R) was then also nominated by Dan Russo to serve as the P&Z representative to Midstate Regional Planning, and also elected unanimously.
At this point, the meeting turned silly and ugly. Adams made a motion that in the absence of a chair, the commission ask Mayor Giuliano, as an ex officio member of P&Z to chair the meeting temporarily. Dan Russo, who also serves as Chair of the Democratic Town Committee, objected strenuously, "I find the suggestion offensive and insulting." The normally equanimous Phipps reached his limit, shouting at the Republicans, "This is audacious and this is destructionist! We [the Democrats] have reached out with our hand with an olive branch." Phipps also claimed that his support for Adams as secretary was purely on the basis of a meritocracy, and had nothing to do with political party.
Russo tied the impasse to the failure of the Republicans to support the election of former Commissioner James Fortuna as secretary at the last meeting, implying that Fortuna's death by a heart attack was related in some way to the obstructionist approach of the Republicans on the P&Z.
After extensive discussion, Adams and the other Republicans admitted that it was not possible for the mayor to chair a meeting, when the bylaws explicitly said that if there is no chair, the vice-chair or the secretary should run the meeting. Adams withdrew his motion relating to the Mayor. Almost an hour after they started, the commission turned their attention to planning and zoning.
Animal Ordinance
A new ordinance for the keeping of animals has been proposed by the Health Department, and Planning and Zoning has been given an opportunity to advise the Common Council before the Council votes on the ordinance. The ordinance is far more nuanced and detailed than the
current ordinance on farm animals, which simply states that any and all animals must be 200 feet from the nearest residence (including that of the owners). The proposed new ordinance regulates what kinds of animals can be kept, and at what density, issues of fencing, how close they can be to neighboring properties and wells, and waste storage and disposal issues. The commission has 35 days to provide its recommendation to the Council.
Ron Borrelli, former P&Z commissioner and current Inland Wetlands commissioner, spoke to the commissioners at length about his problems with his neighbor's horses. Repeatedly informing the commissioners that each horse produces 10 tons of manure per year, he spoke of the pollution that this amount of waste creates. Borrelli passed out photographs of run-off from the neighboring horse farm, and told the commissioners "The Health Department is not doing their job." Pointing to the problems he has experienced, he called on P&Z to reject the proposed new ordinance. He argued that most of the new rules should be in Zoning laws rather than a Health Department ordinance.
The Commission unanimously decided to spend the next two weeks studying the matter, and continued the discussion of the ordinance until the January 27th meeting. They also agreed to later hold a workshop and to get input from the UConn Extension Service, with a view towards modifying the Zoning regulations.
Plan of Conservation and Development
A state law taking effect on July 1st will ban cities without an updated Plan of Conservation and Development from receiving state discretionary funds. The Commission worked assiduously from the summer of 2008 to last fall, to update Middletown's POCD, holding numerous workshops and public hearings. 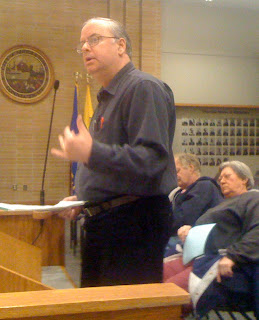 Michael Ennis spoke, as a citizen and as an individual member of the Conservation Commission, of the importance of moving on the POCD, "It's a good blueprint for going forward." Pointing out its importance, he said that the renaissance of Main Street during the past 19 years is a direct product of the 1991 POCD. In a letter to the Commissioners, he praised both the process and the product, "It is my belief this document represents a solid, comprehensive blueprint for Middletown's next decade, and reflects an intelligent and balanced approach to growth, conservation, and Middletown's unique character and quality of life. I also believe it is the product of a diligent, thorough, open and democratic process, and the best collective effort of your commission, City staff and departments, other commissions and private citizens."
The Commission set a date of March 10 to vote on the plan in the draft form as it currently stands (available HERE). They also agreed on a target date of June 9th to finish making changes to the plan and amending the approved plan. Commissioner Johnson proposed January 28th, at 6:30PM, for a subcommittee to work on the POCD. Most of the commissioners agreed to attend.
Randolph Road: Storage Structure at the Emergency Management Headquarters
By statute, all improvements to public facilities (roads, parks, city buildings) come before P&Z for approval and it is customary for the applicant to appear to explain why the improvement is needed. As nobody from the the Middletown Emergency Management team was present, the commissioners tabled the discussion until the January 27th meeting.
A Busy January 27th
An application for a Special Exception by The Public nightclub on Main Street, for an expansion, was scheduled for a public hearing at the January 27th meeting. Two subdivision applications, on Saybrook Road were also scheduled for a public hearing that night.
James Fortuna
Acting chair Richard Pelletier opened the meeting with a moment of silence for Commissioner James Fortuna, who died in December. Commissioner Dan Russo praised Fortuna's service, noting in particular his attendance record over the 20 years that he served, "I was told in all that time he missed three meetings."

I have attended P&Z meetings off and on for over a decade, and it was quite sad last night to see an empty chair where he normally sat. Jim was not the kind of commissioner who displayed passion as a public servant, he epitomized the state nickname, "Land of steady habits." He was always there, always polite, never held a grudge, and most of all never seemed to vote for anything other than what he thought was right for the city. I must confess that there were many times when I wanted him to jump up and down, he never did. There were times I wanted him to shout, he never did. There were times I wanted him to argue violently with another commissioner, he never did. In the end, I came to appreciate his equanimity, he provided the long-term, steady, public service that balances a city, and keeps a democracy going forward through thick and thin.
Posted by Stephen H. Devoto at 1:44 AM

Is this Committee an embarassment to Middletown or what?!

I am confused as to why Michael Johnson is able to hold a seat as a Democrat. In November he was on ballot as a member the Working Families party, and now he is able to take a vacant seat on P+Z. Explain..

Actually election law, as stated by statute and enforced by the Secretary of the State, allows citizens registered with one party to run for a seat with another party. I was a register Democrat when I ran for the alternate seat and therefore still qualified to be appointed to the commission as a Democrat.

Thanks...Nothing Personal, just wasn't sure how that worked

To the Watcher.
The question should be why did Micheal run as a Democrat. With all due respect to Michael why was he still a registered democrat when he ran as a People Party candidate. If he won the election he would not have been able to be seated.
Ask him that question.
Michael, what would you have done if you won?
Some say it was another democratic ploy to seat all 3 alternates as ( really ) democrats.
Sad isn't it.
Middletown Eye should follow this up.I would really like to know.