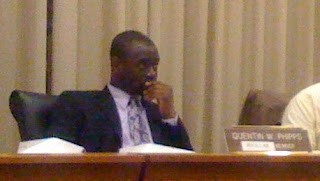 The Planning and Zoning Commission unanimously elected Quentin Phipps as Chair tonight, ending a bitter partisan dispute over who should lead the Commission.
Commissioner Nick Fazzino opened the meeting with a statement on behalf of his fellow Republican commissioners. He started by saying that when the Democrats offered the Republicans the two positions of Secretary and representative to Midstate Regional Planning, while insisting on Democrats as Chair and Vice-chair, it was demeaning.
Fazzino continued, however, that Republicans took the charge for bipartisanship seriously, and he backed up that claim with the nomination of a Democrat for Chair of the Commission, "Therefore, at this time and in good faith and on behalf of the republican commissioners I would like to nominate Quentin Phipps for the chairman of the Planning and Zoning Commission."

After being elected, Phipps graciously thanked his fellow commissioners and pledged to work with both parties on the Commission. And with the words in the title of this post, Quentin Phipps began his term as chair of the Planning and Zoning Commission.
Posted by Stephen H. Devoto at 11:12 PM