Should Food Sharing Be So Complicated? 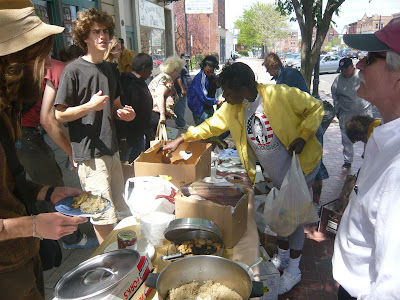 First Church of Christ, Congregational (UCC), along with other congregations and “faith-based organizations” received a memo dated September 8 from the City of Middletown’s Department of Health. I read the memo with interest for two reasons. Our congregation is in the midst of enlisting contributions of soup for the Amazing Grace fundraiser on October 8, to be held in the St. Francis Parish Hall. Also, I’m inclined to believe (though I have no proof of this) that the memo has something to do with the controversy and litigation over Food Not Bombs’ practice of sharing food on Sunday afternoons in front of the Buttonwood Tree. The Health Department’s stated “problem” with FNB was that the food was not prepared in a licensed kitchen. That objection was overcome when FNB began using our church’s kitchen.

Here is what the memo said:

The Middletown Health Department would like to remind you that all prepared food contributions, made in the name of your organization, to any charitable entity (i.e. soup kitchens, shelter, social service agencies), should comply with the State of Connecticut Public Health Code, in that said contributions should be prepared on the premises in your kitchen currently licensed by the Middletown Health Department.

Thank you for your continued cooperation and your commitment to the community.

What I find interesting and troubling about the Health Department’s memo is that, if it were consistently enforced among all faith-based organizations, a very large percentage of the charitable food sharing in our city would have to be stopped. Various components (e.g. desserts and cooked turkeys) of Sunday night meals at St. Vincent DePaul Place are prepared in the homes of church members. The same is true, I gather, for Shepherd Home meals, and I know this to be the case for the free Community Christmas Day Dinner served at First Church (whose kitchen, again, is licensed). It is impossible to prepare a dinner of turkey, ham, stuffing, pies, and cookies for 300 people if the preparation must be confined to licensed church kitchens. There is not enough oven space or standing room. People won’t go to a kitchen to prepare cupcakes. They prepare and share this food, in part, because they can do it at home. For hundreds of years, church members have been making breads, pies, and other dishes at home and bringing them to church. It sounds as if the Health Department is announcing that we can no longer do that.

I am not a lawyer, but my research into the matter has led me to this finding. The state statute (passed in 1995) pertaining to the requirement for food to be prepared in licensed kitchens provides an exemption for charitable and political fundraisers. Apparently, the Connecticut State Health Department interprets this exempting statute very narrowly, with emphasis on the “fundraising” part. This results in the illogical position that it is okay to sell food prepared in non-licensed kitchens, but it is illegal to give this food away. Councilman David Bauer has proposed changes to the City’s health ordinance that would allow this traditional charitable food sharing to continue.

On Friday, a contingent from Middletown faith-based organizations, including Ron Krom, Margaret Minnick, Joel Neubauer, Anne-Marie Cannata, Elaine Deasy, and me, had a meeting with Attorney General Richard Blumenthal, who agreed with our position. After hearing us out, Blumenthal stated in sublime legalese, “This is nuts.” The meeting was arranged by attorneys for Food Not Bombs who were proposing to the AG a change in state law to clarify the intent of the exemption regarding charitable food sharing. The intent, we believe, was to exempt charities, not charities’ fundraising only.

Stay tuned. This is an interesting story, reminding me once again of social taboos regarding food sharing that got Jesus into trouble. I addressed this topic in a sermon last May, A Table In the Presence of My Enemies, that was posted on the Middletown Eye.
Posted by John Hall at 1:14 PM

"So what do we call our little group?"
"Oh, I don't know. But whatever it is it must relate to the Wesleyan community and piss off a lot of people at the same time."
"How about- Food Not Bombs?"
"That should do it!"

Do you think the trouble started there?

Thank you, John. This piece really gets at the irony of the state wanting to regulate charitable food offerings for this nebulous thing they call "the public good". If the state really cared about "the public good", there wouldn't be hungry people in need of feeding by organizations like Food Not Bombs and church groups across the country.

Thank you for your story, and for keeping the rest of us up to date. Thank you also for standing up for what's right. I believe with all my heart that we have a responsibility to take care of each other. I don't mean that we leave it to "government" to do it, but that we open our eyes to the needy around us, here in our town and our neighborhoods, and we contribute as we can. Since September is Hunger Awareness Month, perhaps you could post a follow-on piece that suggests specific actions Middletown residents could take to help out. Thanks again for all your work!

wow. Blumenthal's quote says it all. Maybe you should start "charging" a penny for the food until this is resolved.

To Anonymous September 19, 2009 9:00 PM - Food Not Bombs may have a Wesleyan chapter but it did not arrive at this name, Food Not Bombs is an international movement. I think the name brings attention to the fact that we spend all of this money on war and not on basic needs of people such as food. http://www.foodnotbombs.net/story.html