The document on the left is the first page of Johann Sebastian Bach's "Suite No. 1 in G major, BWV 1007" composed for the cello in the second decade of the 18th Century. It is but 1 of 6 that Bach composed, a work that defines classical players. There are many recordings of the pieces, from Pablo Casals' first 78 rpm disks from 1925 to Mstislav Rostopovich to Yo-Yo Ma (he's done 2 brilliant sessions, separated by 15 years) to transcriptions for many other instruments including violin, double bass, piano, mandolin, guitar, saxophone, tuba (!) and trumpet.

Now you know what music you missed. What isn't visible from the listing is Mr. Duckles' informative introductions, the view from the windows behind him of the leaves falling in the Library Courtyard (pictured left), the fingers of his left hand articulating the notes as they moved easily and swiftly around the neck of the cello, the overtones when he plucked a string, and the decay of the deep, sonorous, low notes on the slower movements. You should know that Duckles played the Bach "Suites "from memory and that this was one of the first times he had played Ms. Thomas' short but demanding composition in public. The Harbison "suite", influenced by Bach but much starker and a bit frenetic, contains a "Fuga-Burletta" that is tricky to play, a thorny and virtuousic short section of a work that looks both back and forward. 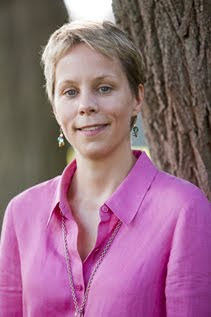 After a short break, Mr. Duckles returned to tell us about Augusta Read Thomas (picture) and perform "Bells Ringing Summer." A challenging piece for both listener and performer, with drawn-out tones, quick plucked notes, the short work has great urgency and its shivering, keening, melody prayer-like.

In comparison, "Suite No. 3" is often light-hearted, sprightly, with pretty melodies (such as the stately "Sarabande" section) while the "minuets" section display bold melodies but are never brash, always tuneful. The wondrous "Prelude" section that opens the work is built upon beautiful, thick, rich chords with low notes that reverberate deeply with one's body. 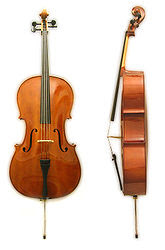 What the audience could see and hear was Jason Duckles' passion for music and his boundless desire to inform, educate and entertain. One often encounters musicians who are aloof, unwilling to engage with the audience because they are shy or in a state that does not allow for interaction. Jason and his wife, violist Anthea Kreston, are a big part of the Middletown "arts" community. They embrace their roles as educators and love to share their knowledge and talents. They never talk or "play" down to an audience.

Jason Duckles is a world-class musician, with a tone and articulation of melody that speaks of many hours of perfecting his craft. He is, also, a world-class person, with a smile and demeanor that makes one realize that, while music is a passion and his life's work, being alive, involved, and "in the moment", is equally important
Posted by Richard B. Kamins at 8:51 PM

CELLO
\
Those who don't like it say
it's a mutant violin
that's been kicked out of the chorus.
Not so.
The cello has many secrets,
but it never sobs,
just sings in it's low voice.
Not everything turns into song
though. Sometimes you catch
a murmur or a whisper:
I am lonely.
I can't sleep

I wish I could have attended...