Democrats Nominate Unaffiliated Candidate for Board of Education Slot: Corrected from an earlier post 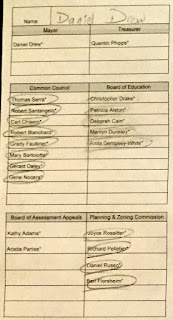 One of the candidates selected by the Middletown Democratic Committee for a spot on the
November ballot for Board of Education is reportedly not registered as a Democrat.

As of Monday, Anita Dempsey-White was registered as an unaffiliated candidate on town, and CT Secretary of State voter lists..

Meanwhile, petitioning candidates Sean King, and Susanne Wesoloski, are nearing their goals of filling petitions with the signatures of 489 qualified Democratic voters to place their names before voters in a primary in September.  Hope Kasper, has already forced a primary for Council by collecting enough signatures.

King, a father of two children at Spencer school, is an attorney with the state department of healthcare advocacy.  He was involved in pushing for adequate funding of schools in the city budget, and is a member of the newly-formed Board of Ed redistricting committee.

Wesoloski is a retired Middletown teacher who has taught in first, fourth and sixth grades at Snow, Wesley and Farm Hill Schools.  She has also served as a language arts specialist.  Wesoloski served as vice president of the Middletown Federation of Teachers, and is a 40 year resident of Middletown.

This is the second consecutive election in which the official Democratic slate has been successfully challenged by candidates who were not selected by the Democratic Town Committee.

DISCLAIMER: Ed McKeon is a Democratic member of the Board of Education and supports King and Wesoloski's bid for election.
Posted by Middletown Eye (Ed McKeon) at 10:55 AM

Wait? What? No update on Steve Kovach?

Does it really matter she's unaffiliated?

What matters is that the committee interviewed a very qualified registered Democrat, Sean King, and rejected him and accepted an unaffiliated voter.