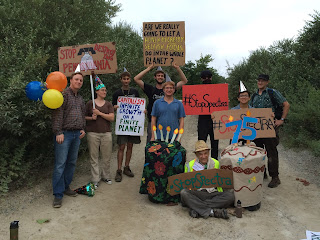 From Dan Fischer and Adina Bianchi.
---------------
In celebration of his 75th birthday today, Middletown resident Vic Lancia locked himself to two giant “birthday cakes”—actually concrete-filled barrels decorated with candles and frosting— on the sole road leading up to a site where Spectra Energy stores construction equipment and materials for use across Connecticut. By blocking Spectra workers from accessing the site, Vic aims to disrupt Spectra's ongoing construction of its "AIM Project", a billion dollar fracked-gas pipeline expansion affecting communities across the State.

“It's simple,” Vic explained. “Capitalism and the burning of fossil fuels are destroying our beloved and beautiful planet, the habitat for all humanity and life, all for profit and convenience. Isn't it time to resist? Do we not care for our children, the generations beyond our lives, and for life itself?”

Vic is a member of Capitalism vs. the Climate, a horizontally-organized, Connecticut-based group that takes direct action against the root causes of the climate crisis. About ten other members and supporters joined Vic, sharing chocolate cake and waving balloons. Beneath the festivities, however, they expressed outrage at Spectra's pipeline expansion.

“Spectra's pipeline expansion is catastrophic in many ways. It creates incentives for fracking in the shale fields. It transports highly flammable gas just one-hundred feet from a nuclear power plant in New York, potentially endangering tens of millions of people. It accelerates global warming, since fracked gas has an even higher impact on the climate than coal does,” said Willimantic resident Roger Benham.

Updates and photos will be posted later today at capitalismvsclimate.org. The public is urged to make donations to support the action at: bit.ly/CVC-Action
Posted by Stephen H. Devoto at 1:10 PM