The Planning and Zoning Commission held a public hearing on the guiding principles of the Plan of Conservation and Development on Wednesday evening. The POCD is the document which guides all zoning regulations and thus exerts a powerful influence on all individual land use decisions in the City. The guiding principles were the consensus product of a workshop last September, and will be used to shape the drafting of changes to the POCD.
Two members of the public spoke against the guiding principles. Both of them are long-time citizen activists who have studied Planning and Zoning documents and frequently attend public meetings to express their support or opposition to P&Z actions. 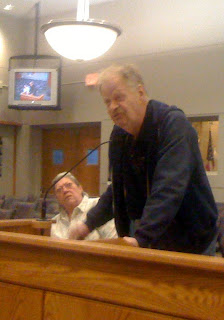 Eleanor Kelsey opened the discussion with a complaint that the POCD documents were inaccessible on the web site, and when she asked for a copy from the town clerk's office, the clerk also had no copy. Laurence Buck echoed this complaint, and added that the POCD as written or as proposed, does not have a 'guiding principles' section. He concluded that the notice for the public hearing ("Proposed update of Guiding Principles of the Plan of Conservation and Development") was illegal.
Neither Phipps nor Deputy Director Michiel Wackers said that the guiding principles were on the web site (the Planning Department has an extensive and nearly exhaustive set of POCD documents, but as far as I can find, the guiding principles are not there, my report on the discussion on principles is in the September 24 Eye, but final language of the guiding principles was developed after that meeting, by Bill Warner).
Kelsey expressed her concern that some of the language in the guiding principles might prevent a land owner from using their land in a way they see fit, "You would have stripped landowners of their rights without compensation." She also objected to an encouragement of alternative forms of transportation without any encouragement of better auto traffic patterns, "We need to connect streets to create cross-town connections. We need to address more than just buses, bikes, and walking."
Kelsey urged the commissioners to hold the public hearing open to allow other members of the public to comment. The Commissioners agreed with her, and continued the public hearing until the April 28 P&Z meeting.
Other matters
A two lot subdivision at 309 Chamberlain Hill Road was approved without controversy. This subdivision will divide a 20 acre active farm with one house, into a one acre lot with the existing house, and a 19 acre lot with the farm and a new house.
The Commission scheduled a public hearing on a proposed zoning Code text amendment regarding the "sale or dispensation of marijuana and/or medical marijuana." This hearing will be at the April 28 meeting.
Commissioner Barbara Plum returned from her annual 4 month Hawaii hiatus, attending a meeting of the commission for the first time since November.
The controversial February P&Z decision to allow The Public Nightclub on Main Street to continue operating was discussed briefly. Mayor Giuliano, who strenuously opposed the P&Z approval, initiated an appeal by the City of the P&Z decision in Superior Court (Middletown Press coverage). Chairman Phipps reported that he had spoken about this issue at the April Common Council Meeting.
Phipps told his fellow Commissioners that The Public had closed since the lawsuit was filed, and thus the appeal by the City was moot.
Posted by Stephen H. Devoto at 5:00 AM

Email ThisBlogThis!Share to TwitterShare to FacebookShare to Pinterest
Labels: plan of conservation and development, planning and zoning commission

So, we have elected board members who take 4 month vacations? Don't get me wrong, I'm all for taking vacations several times a year; It's the only way to stay sane. But 4 months, that's a 1/3 of the year! Why is that even allowed? I can only store up to 30 days worth of vacation at my job, and even then I'd be lucky to get a 2 week vacation approved. I believe that if a place can operate for more than two weeks without you, then they don't need you. If you run for election to a commission, don't you PLAN to actually contribute something to that board? So to Barbara Plum, please re-evaluate your priorities.

"Why is that even allowed?" Retired maybe!!!!!!!! And as far as her priorities it seems clear, her health and well being. Who can argue with that and who might you be to determine ones vaction schedule.

Maybe you Anonymous should step up to the plate and help resolve some political issues that seem to aggrivate you.

Of course it is much easier to post on a blog and complain as opposed to stepping up. Not to say that you do but if the shoe fits please wear it with style, respect those who are at least contributing their time.

In preparation for last nights hearing the final draft of the Guiding Prinipals were filed in the Town Clerks Office on March 31,2010 and have been hanging on their public viewing bulletin board since then.

The POCD as proposed since 2008 has always included "Chapter 11 Planning Principals". The proposed Chapter 11 has been on file in the Clerks Office and on the web site for well over 1 year.

Principals: A main participant in a situation; A person having a leading or starring role. (from Answers.com, The American Heritage® Dictionary of the English Language, Fourth Edition cited)

Principles: fundamental norms, rules, or values that represent what is desirable and positive for a person, group, organization, or community, and help it in determining the rightfulness or wrongfulness of its actions. Principles are more basic than policy and objectives, and are meant to govern both. (from Business Dictionary.com)

Babara Plum appears to have her priorities straight. It's the Voting Public that keeps on sending her back to the Board. So I ask, who's priorities are screwed-up?

I agree, its the public that has its priorities screwed up. Vote her out. Middletown deserves much better!