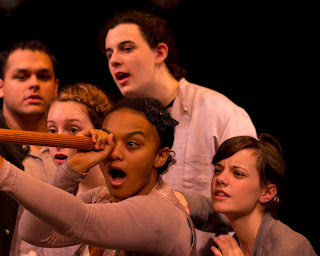 Registration is now open for classes and productions for young people ages 5 – 20 at Oddfellows Playhouse Youth Theater in Middletown. Most programs begin the week of September 17.
Oddfellows has been offering fun and challenging theater and circus programs to central Connecticut young people since 1975, and has repeatedly been recognized by Connecticut Magazine as the State’s “Best Children’s Theater”.

Programs for teenagers include the Teen Repertory Company, the Playhouse’s senior performing group, and Circophony, a circus training program for ages 12 – 19. This fall the Teen Repertory Company will be producing Sophocles’ classic tragedy Antigone, directed by ARTFARM Artistic Director Marcella Trowbridge. Auditions are open to anyone ages 14 – 20 (must be in at least ninth grade) and all who audition and make the commitment to rehearsals and performances will be cast. Two free workshops will be offered on September 13 and 17 in preparation for auditions, which will be held Thursday, September 20, 6:30 – 9 pm. Performance dates are November 29 – December 1 and December 7-8.
In addition to Antigone, teens may enroll in a series of Playwriting and Directing classes which will begin October 7 and culminate in a New Plays Festival on February 1 & 2.

Circophony offers structured and rigorous circus training for teens. This fall students may choose from one evening or two evening per week options during two four-week sessions. Topics available include Contortion & Flexibility, Juggling (introductory and advanced), Partner Acrobatics, Stilting, Mini-Trampoline, Handstands and Physical Comedy. Students can select the specific disciplines in which they wish to train.

For young people ages five to fourteen programs are broken down into Stage One (ages 5 – 7), Stage Two (ages 8 – 11), and Stage Three (or Junior Repertory Company, ages 12 – 14). Classes are offered weekly starting September 17 in an eight week after school session culminating in a “Share Day” on Saturday, November 10. A variety of classes are offered at each stage on weekday afternoons starting at 4:30 pm and on Saturday mornings. Stage Two performers can join Grimm and Grimmer, a mini-production developed by the cast and director from some of the lesser known stories by the brothers Grimm. Stage Three students can choose Filmmaking at our Fingertips or Intermediate Improv. Middletown public school students enrolled in Monday through Thursday classes may opt to join “Oddbridge”, in which a school bus will drop them at the Playhouse after school and they can get a snack and engage in supervised arts activities until classes start at 4:30.

The Fall program at the Playhouse also features several exciting special events. On Saturday, September 15 at 2 pm Oddfellows presents Casey Carle in Bubblemania, a unique and thrilling family show featuring comedy and magic with bubbles of all sizes and shapes. The first Middletown Teen Talent Search will be held at the Playhouse on Saturday, October 6. Middletown young people ages 12 to 19 will have the chance to compete for cash prizes, culminating in a public final round at 7 pm, hosted by Connecticut State Troubador Nekita Waller. ARTFARM’s Circus for a Fragile Planet  will debut its new show at Oddfellows on Saturday, November 3 at 2 pm & 7 pm. This four person show uses circus to promote environmental advocacy.
For adults, Oddfellows is partnering with Russell Library and ARTFARM to offer a free day-long workshop with Congolese theater artist Toto Kisaku on October 20. The workshop runs 10 am to 5 pm, lunch is included, and space is limited. Minimum age 16.
On November 16 & 17 Middletown’s Vintage Players will present Vintage Ventures, a benefit performance for Oddfellows Playhouse.

For details about any of the above programs, including tuition and financial aid, or to register, go to www.oddfellows.org or contact Oddfellows at info@oddfellows.org or call (860) 347-6143. Oddfellows Playhouse is located at 128 Washington Street in downtown Middletown. Playhouse programs are made possible due to generous support from the United Way of Middlesex County, Middletown Commission on the Arts, Community Foundation of Middlesex County, Liberty Bank Foundation, State of Connecticut Judicial Branch, Middletown Youth Services Bureau, Connecticut Office of the Arts and the Stare Fund.
Teen Rep photo above by Seth Lerman. Children's Circus photo below by Bill De Kine. 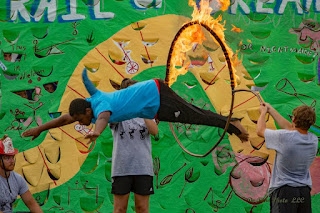 Posted by Oddfellows Playhouse at 2:26 PM