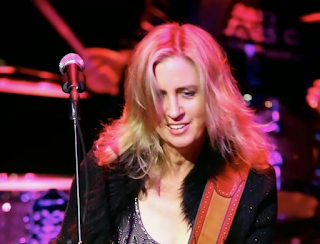 Cindy Lee Berryhill will perform at the Buttonwood Tree on Main Street in Middletown on Friday, August 17, 8 PM.

I've been doing a weekly radio show at WWUH (91.3, University of Hartford) since 1985.  Over those years, there have been more than a few artists who have created a lasting impression, and a lasting body of work to sustain the original impression.

Cindy Lee Berryhill is one of those artists.

Berryhill, from San Diego, sprang on the scene with a song released for an alternative compilation called Radio Tokyo Tapes (Volume 3).  When I first heard her song Damn, I Wish I Was A Man, I knew there was something special going on.  The quirky, dreamy, biting condemnation of male domination in society, was sung in a wistful yodel that made its feminist message funny and memorable.

Berryhill recorded the first album of original songs for Rhino Records, which had previously only released compilations.  With good notices for Whose Gonna Save The World in her fist, she moved to New York and helped start the anti-folk movement with other anti-folks like Michelle Shocked, Brenda Kahn and Beck.

Berryhill's second album, Naked Movie Star, released in 1989, featured a prescient protest song about a New York city real estate developer.  Trump, the song, may have been the very first of its kind written about a particular president who has come to haunt our dreams.

Back in California and several years later, Berryhill released the musically-complex Garage Orchestra, and a few years later Straight Out of Marysville, which included the poignantly autobiographical High Jump, that presaged the #metoo movement by many years.

Berryhill married Paul Williams, rock journalist, author and founder and publisher of the first rock music magazine, Crawdaddy. Their star-crossed romance was interrupted when Williams developed dementia after a brain injury suffered in a cycling accident.  Berryhill temporarily abandoned music to tend to her husband, whose illness became worse over time, until his untimely death in 2013.

After a decade of non-recording, Berryhill released Beloved Stranger, which was filled with songs reflecting the complex relationship she shared with her injured husband.  It also featured another protest song that captured a political movement that was turning Christianity on its ear.

It took nine years, but Cindy Lee's latest, The Adventurist, is a hallmark of her career, and has earned rapturous reviews.  It references the variety of styles and personas she's inhabited over the years, and it shows of depth of composition and performance that she's flirted with over her career.  Her playful lyricism belies an examination of a world that can be dark, dangerous and sorrowful, but can also provide unvarnished joy.

This is a rare Connecticut appearance by Berryhill, and her "trio" which includes cellist Renata Bratt and percussionist (including glockenspiel) Paula Luber.