A report by investigating attorney "Penny" Mason will be released at a special "workshop" Common Council meeting at 6 PM on Monday (August 13).

The report was supposed to have been released at a Common Council meeting on August 6, but the Committee assigned to conduct the investigation was thwarted when Councilman Gerry Daley asked the corporation counsel Attorney Dan Ryan whether the call of the meeting was legal.

"We checked again, after that meeting, with the staff attorney at the state FOI (Freedom of Information) office," Council member Seb Giuliano said.  "And we were told that once the mayor declares the call of the a 'legal call,' and declares the meeting 'a legal meeting' then it can't be undone.  He did declare the meeting legal.  You can't unring that bell, and the meeting should have been held."

For the upcoming meeting, the report on the investigation will be held in public, while at the previous meeting it was planned to be held in a private executive session.  In both cases, by meeting's end, the public would be informed of the content and substance of the investigation.

"It's the Council's privilege to hold a public meeting," Giuliano said.  "The mayor wants it presented in public and I have no problem with that.  I don't think were going to find out anything that was going on that shouldn't be made public." 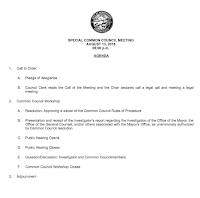 There is a "public hearing" on the agenda, so members of the public will be allowed to offer comment after the report of the investigation is made by Attorney Mason.

Since the meeting-that-wasn't-a-meeting last Monday, Common Council members were notified in a FOI (freedom of information) request from the mayor that all Council members involved (Giuliano and Council member Mary Bartolotta) must make communications between them, and the investigating attorney available to the mayor.  The committee has indicated that those communications are considered confidential under attorney/client privilege.  The mayor's request claims that the attorney/client privilege does not exist in this case.

"The mayor sent out the FOI, and it targets me and Councilwoman Bartolotta," Giuliano said.  "We have four days to respond, so I'll be responding on Monday."

Giuliano indicated that as a Council member he and Bartolotta are entitled to legal representation in the matter, and because the City Attorney's office is being investigated in the report, the City Attorney cannot represent them because of a conflict of interest.

"The counsel is of my choosing," Giuliano said.  "I will be seeking counsel, and it's on the city's dime."
Posted by Middletown Eye (Ed McKeon) at 11:27 AM

So pissed I’m going to miss the circus. Save me some popcorn.

I'll be there. What time?