Faced with a shortage of certified planning officials in the city's office of Planning, Conservation and Development Mayor Dan Drew is proposing two new positions for the office.  One position, a "City/Town Planner" will not have the title of Assistant Director, but is being proposed at the same pay grade.  Another position "Community Development Specialist" will be responsible for grant applications and grant management along with other duties. 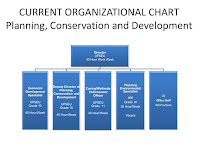 The city also is in the process of hiring a Zoning Enforcement Officer to replace Michelle Ford, who left the office as of July 29 for a new job at Eversource.

Concern about lack of certified staff in the Planning office arose a few weeks ago with Ford's departure.

The new positions need to be vetted by the General Counsel Commission at their meeting next Thursday (8/9), before they are presented to the Common Council.

In an email, Planning Director Joe Samolis outlined his approach to office vacancies, and a restructuring of the duties in the office: 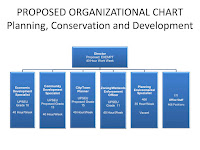 "We are at a point in the office where we can make changes due to these vacancies that will both increase efficiency in the office as well as increase productivity to better serve the City...In essence, I am advocating for the creation of a City/Town Planner to be added to the department along with some organizational shifts within the staffing.  I have heard from many individuals from the various commissions and committees that this department works with and I feel that this will give the best outcome for the department as a whole."

According to the job description, the new city planner would be responsible for organizing and implementing a comprehensive plan of development, as well as assisting the Planning and Zoning Commission in developing regulations.  Requirement for the position include a Bachelor's degree in Urban Planning, Environmental Studies or a related field with appropriate experience, and a certification as a planner by the American Institute of Certified Planners.

The planning office has consulted with city unions in creating the proposed staffing plan.

As a condition of his hiring in April 2017 as Director of the planning office, the Common Council required Samolis to pursue AICP certification within three years of his hiring.  Samolis has not begun his pursuit of that certification.

In a related matter, with no certified planning staff in the office, The Commission on Conservation and Agriculture has suggested a moratorium on all subdivision and zoning applications until the city hires qualified staff.  To put a moratorium into effect, a change in zoning language would be required with a hearing before the Planning and Zoning Commission.

The planner has suggested that a moratorium is not necessary as appropriate consultants can be hired in the interim to handle planning matters.  Currently, former city planner Bill Warner, who is now city planner in Farmington, has been contracted for consulting services.

Of course hire an AICP how else will the director get his credit hours to be apply to apply to take the planner tests?

It is against the LAW to impose a moratorium for lack of staff.

Let me make sure I understand this article? The Mayor reorganized city departments when he was first elected. Now, he wants to reorganize the PZ&C department again?
The only reason this department needs to be reorganized again is because of HIS appointment with unqualified buddy Joe Samolis to the PZ&C directorship. Apparently, Joe had no intention of getting the proper certification for the job when vetted by the Common Council as promised.
Mayor Drew now thinks it's a great idea to hire a non-deputy director for the department with the proper credentials Samolis should have, and pay the non-director, directors pay. PZ&C has the highest paid director under general government in the City. Ridiculous!
Drew has a lot of nerve to say he does not hire cronies to city positions. Drew has created his own type of cronyism!

This is a joke right? Just when I thought this mayor and city could become no worse I read this. In what organization anywhere can a director or leader be less qualified than his staff? This astonishes me. Where's the common council? Why is our leadership so quiet on these matters.

This city has so much potential but never under current leadership. This mayor should step down at this point, I find this recommendation insulting to the common tax payer.

Joey needs 18 months to attain his license, if he was given 3 tears to obtain it at the halfway point if he has not begin wouldn't it be impossible to obtain the license by the 3 year deadline? Shouldn't he be fired at the 18 month mark, why wait until the 36th month?

Please if I'm wrong or misunderstanding something here someone please help me better understand.