Replica of Adriaen Block's Vessel To Land in Middletown 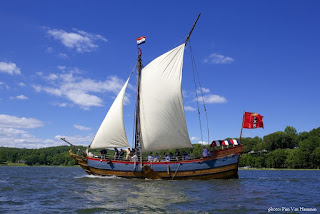 Following Henry Hudson’s 1609 expedition, Dutch captain Adriaen Block was hired to explore the northeastern coastline of America with the intent of establishing trade with Native Americans and claiming parts of the territory for the Dutch Republic.  On his fourth and final voyage (1613-1614), Block’s ship the Tyger was destroyed by fire while in New York Bay.  Block and his crew went to work near Manhattan building a new vessel - the Onrust (launched in New York Bay in April 1614).

The Onrust investigated coastal New York, Long Island, Connecticut, and Rhode Island. In the course of his travels, Block became the first known European to travel up the Connecticut River to just north of Hartford (a distance of approximately 60 miles from Long Island Sound).  He recorded the conditions, the places that he saw, and the native people he encountered.

The impacts of Block’s travels were many.  Upon his return to Amsterdam in July 1614, Block’s explorations, along with the collective knowledge from other expeditions, were documented in the “Figurative Map of Capt. Adriaen Block” -- an incredibly accurate map of the northeast region given the navigation and surveying instruments of the day.

From June 19 through June 26, the Onrust will cruise up the Connecticut River for the first time since 1614.  Between Thursday, June 21 and Sunday, June 24, she will be at Riverfront Recapture's Mortensen Riverfront Plaza in downtown Hartford.  During this time, she will be involved with a series of dockside and on-water programs.  On Sunday, June 24 she will make her way down River as part of a special cruise to Middletown's Harbor Park at the Mattabesett Canoe Club.  Spectators should be able to see her come into port around 4:30 PM (exact time will vary depending on currents).  Then on Monday, June 25 she will be open for dockside tours between the hours of 2 and 4:30 PM.  At 5:30 PM, visitors 21 and over can enjoy a Thirsty River Cruise with the Connecticut River Museum's resident folklorist Stephen Gencarella.  This program examines alcohol's complex history in the River Valley and is currently the featured summer exhibit at the Museum.  The program will include several regional drink tastings.   Everyone is invited to participate in a slightly longer sunset cruise at 7 PM.  Reservations to eat at the Mattabesett Canoe Club or to get a prearranged boxed dinner to enjoy on a cruise are encouraged.

Connecticut River Museum Executive Director, Christopher Dobbs stated “We cannot be more thrilled to bring this historically important vessel up the River.”  In fact, as Dobbs notes, Block’s discoveries ushered in dramatic changes.  Most notably, the cultural interchanges (often leading to calamitous consequences) between Native Americans and Europeans, colonization, the founding of New Netherland, and the ecological impacts due to global trade.  It was “at least in part thanks to Block’s work that a Dutch trading post was established in 1624 in Old Saybrook and that Hartford [House of Hope] became New Netherland’s eastern-most trading post and fort.”

The re-creation of the vessel was spearheaded by New York based nonprofit The Onrust Project. Following extensive research, the rediscovery of traditional Dutch shipbuilding techniques, and the efforts of over 250 volunteers, the vessel was launched in 2009 at the Mabee Farm Historic Site, Rotterdam, NY.

Tickets to the Middletown Thirsty River Cruise at 5:30 PM are $32/person (21 and over) and the Sunset Cruise at 7 PM are $38/person (child or adult).  Tickets may be purchased online at ctrivermuseum.org, by calling the Museum at 860-767-8269, or at dockside at least 20 minutes in advance if available.  Please note that space is limited.

Posted by Jen Alexander at 4:30 PM