Two city employees who have filed formal grievances against the city, specifically the mayor and the city attorney's office which also doubles as the city Human Resource department, have amended those grievances to record what they see as increased and intentional harassment and intimidation in retribution for their original complaints.

Linda Reed, the clerk of the Common Council, filed her original grievance at the end of February.  In March, she applied for position of Deputy Director of Planning, Conservation and Development.  She writes that she was "among the most-qualified candidates evidenced by about 40 years of professional experience."  Reed says that she withdrew from consideration for the position as a result of "explicit and implicit" intimidation by Mayor Daniel Drew and HR Director Tolkarz.

Reed also accuses the mayor of intimidation and retaliation by calling a formal meeting to discuss "potential discipline action" against Reed.  According to Reed's complaint, the mayor attempted to solicit a report from HR director Faith Jackson pertaining to complaints about Reed.  According to Reed, Jackson indicated there were no complaints, and refused to issue a report to the mayor.  She also reports in her amended complaint, that despite any notification of complaint, the Mayor conferred a "disciplinary consultation" on April 3. 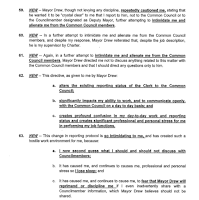 In addition, Reed claims that the mayor, and deputy mayor Robert Santangelo, both met with her and declared that they were her immediate supervisors and not the Common Council.  Reed indicates in her amended complaint that when she was hired she was told by HR director Tolkarz that she would report directly to the Common Council.  Reed claims that the new reporting structure makes it impossible for her to be completely responsive to the needs of the Council. 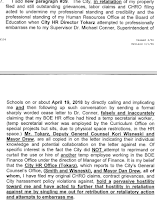 Michelle DiMauro, Human Resources Director for the Board of Education issued an original grievance complaining that a job evaluation conducted by the city failed to properly recognize her duties and responsibilities, and as a result did not provide her the appropriate upgrade in pay and grade level.

DiMauro accuses Deputy General Counsel Kori Wisneski  and HR Director Tolkarz of contacting school superintendent Michael Conner with false accusations in an attempt to embarrass and "undermine my professional standing and ability."  According to DiMauro, Wisneski questioned a properly filed grievance, and Tolkarz complained about a case of "missing paperwork" that had been resolved months previously. 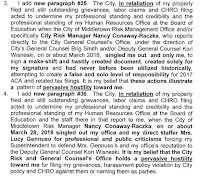 Nancy Conaway-Raczka, was responsible for the Risk Manager's office demanding, in retaliation, that DiMauro, and her staff, handle ACA (Affordable Car Act) and tax filings previously handled solely by the Risk Manager's office.  In her complaint, DiMauro claims that the Risk Manager attempted to shift responsibility of ACA filings to DiMauro, asked DiMauro to sign a "make-shift and hastily created document" accepting responsibility, and then complained to Superintendent Conner who was forced to defend "my office's repution to the Deputy General Counsel Kori Wisneski."

Finally, DiMauro indicates in her amended complaint that the original charges of discrimination due to gender bias still stand because her grade level and pay upgrade have not been implemented despite a decision by City Equal Opportunity and Diversity Director Faith Jackson to implement.  DiMauro accuses the city of attempting to discredit Jackson's decision.  DiMauro also accuses General Counsel Brig Smith of campaign to smear her reputation. 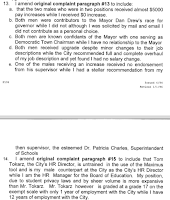 DiMauro's complaint indicates that the original perception of discriminatory action appears to be based on gender, and with a favorable relationship to the mayor.

DiMauro has requested that the Connecticut Commission on Human Rights and Opportunities investigate her complaint.

When will ANY COMMON COUNCIL MEMBERS, stop employee harassment by Mayor Drew and his henchmen! I have never seen a Mayor bully people around the way Drew does. Shame on those who are turning a blind eye to this mans behavior!

Well John, I invite you to run for city council

When will this stop! The mayor has bullied others throughout his time in office and people are afraid to talk about it, because they fear for their jobs.
It seems to me, that the mayor cares more about what's happening in Washington D.C then what is happening in Middletown, under his watch.

Todd, I feel I'm better off serving the public being on the "outside", where my words and investigations can't be squashed by "the political system". When "others" (newspapers) feel they will decide what the public will hear about as being news worthy, and it's usually fluff, I will not be part of it. When a specific "constituency" group backs you, then they "own" you and you have to tow the mark to ensure your re-election(s), that's not for me. I'm not one to be in the "favor business". Maybe my thinking doesn't come from the political side because I was brought up in the 60's, when we questioned EVERYTHING because the "people" stopped turning a blind eye, and got pissed off at our political leaders. Maybe my beliefs stem from my blue collar parents who instilled in me to be honest, hardworking, treat people fairly, help those who can't help themselves, and don't back down from your beliefs. Hopefully, I live long enough to see another citizenry "revolution".

As one who was bullied, or at least he attempted to bully me, by the Pathetic Asshat Drewpy, nothing surprises me about this failure. His path to “greatness” cut short by his arrogance and lies. Too bad our council won’t and don’t stand up to him. That are as pathetic.