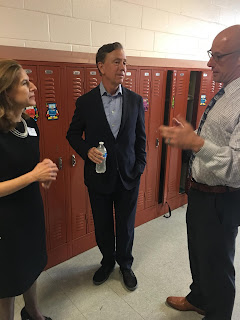 Lamont's running mate, Susan Bysiewicz, a candidate for lieutenant Governor, indicated that "the correct mix of public, public magnet and public charter schools," was the best approach to provide a quality education for the state's students. 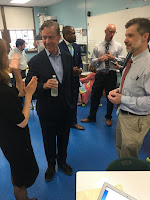 The questions came at a visit by Lamont and Bysiewicz to Macdonough Elementary School in Middletown's North end.  Macdonough, the oldest elementary school by decades, in Middletown, and the school which hosts the most diverse student population, has proven to be a very successful neighborhood school, and a center of community activity.  However, over the years, Macdonough has been threatened repeatedly with closure because of its size and the age of the physical plant. 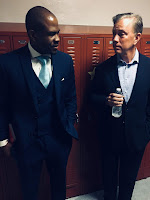 Principal Damian Reardon, along with Superintendent Michael Conner, led Lamont and Bysiewicz on the tour of the school, pointing out recent innovations like the STEM program, Middletown's only gifted and talented program, and recent upgrades in student technology, furniture and supplies.  Reardon also pointed out the challenges of creating innovative educational programs in a building that was designed for a 19th century approach to education. 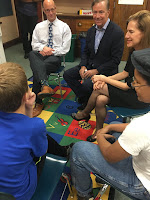 Reardon also explained that the school population included many students with economic, social and psychological needs, and that many of the students faced a lack of classroom consistency because they are often uprooted by family moves.

"We had a new student enroll today," Reardon said.

"How do you deal with enrolling a new student in June," Lamont asked.

"We try to get them settled.  Make them feel at home, and get ready for next year," Reardon replied. 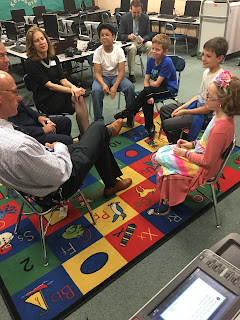 Lamont and Bysiewicz sat with a group of students to find out how they're take on the school, and their aspirations.

When questioned about the needs at a school like Macdonough for early childhood education, preparedness and preschool, Lamont asserted that all students deserved preschool preparation.

He acknowledged the shortcomings of the state funding system (ECS), calling it "hit or miss."

"We want to make sure the resources go to the schools that need them most," Lamont said. 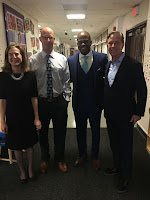 When asked how the state would pay for equitable funding for schools and whether it would include tax increases, Lamont indicated that additional taxes might be necessary.  He seemed to have less confidence in gaming revenue as a funding source, and mentioned that taxes on digital commerce might be an approach.

I think Neds house has more bathrooms then Mac D!